I was just doing my job 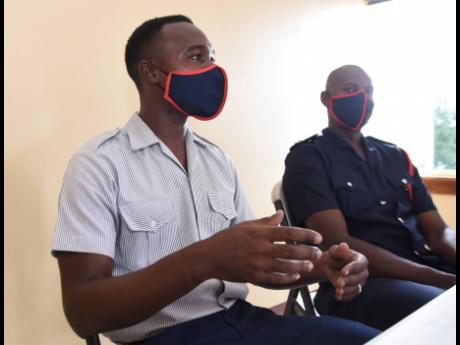 Kenyon Hemans/Photographer
Firefighter Dennis Taylor (left) and Otis Rowe, assistant superintedent in charge of St Catherine speak about the rescue of a man who was trapped in a 55-ft deep hole in St Catherine. 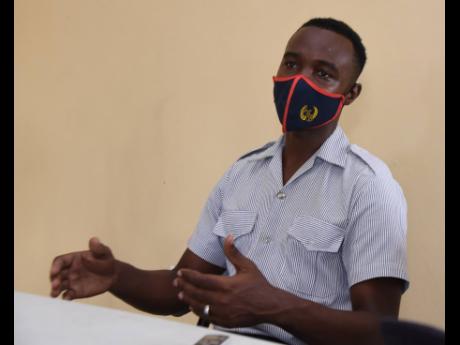 In the eerie stillness, dense air and surrounded by pitch darkness, St Catherine firefighter Dennis Taylor wondered to himself after descending in the 55-ft hole if he could survive two minutes, let alone four nights in those conditions.

The 38-year-old firefighter had this thought when he went down in the hole to execute the rescue of 65-year-old George Smart, a cabbie who was thrown into a 55-ft hole in Jones Avenue, Spanish Town, St Catherine, last month by thugs who robbed him of his motor car and cash.

Taylor gave a horrifying account of his heroism that prompted Local Government Minister Desmond McKenzie to disclose in Parliament that he deserves a national honour.

“The air down there was dense, it was very warm, but I had breathing training so I was able to relax myself,” he disclosed

Taylor said by turning off the lights and trying to put himself in Smart’s position, the thought of not being able to see his family again was foremost in his mind, and it was frightening.

“It was not a nice feeling for me, it was scary and lonely and I thought about him down there not knowing if he would ever come out alive, was the only thing in my mind,” he said.

Born in Point Hill, St Catherine, the nine-year veteran of the Spanish Town Fire Department told The Gleaner that, on reaching the bottom of the cave, the thought of how one could have survived such a deep fall dissipated because of the conditions he encountered.

“I understood how he was able to survive, there was an accumulation of debris at the bottom comprising mainly plastic bottles, garbage bags and trash, my first order of business was to affix the rope around the victim and indicated by flashing my light that I was ready for him to be taken up,” said Taylor, a father of two boys aged 10 and 12.

He continued: “At that moment being in the hole, all the focus was on getting the gentleman ready to get him to safety, he made it easy for me because he was surprisingly strong and was able to stand up by himself.

“At first I didn’t have any idea that the cave was that deep, the flashlight I had could not illuminate the cave, so I had to use a special LED light supplied by my supervisor. It was a collective decision that I go down, base on my agility and physical conditioning,” said Taylor, an alumnus of Point Hill Primary and Spanish Town High schools, who had thoughts about playing professional football before becoming a firefighter.

According to him, he was fearless making the descent mostly because of his training.

“One of the things that pushed doubt and fear out of my mind was the fact that it was an elderly man down there and he had been there for so long and survived, so I was saying to myself, if he could have survived that fall then I could reach him and perform the rescue.”

Taylor said he does not consider himself a hero because he was just performing his job, but the thought of getting a national honour is a motivating factor, especially for his sons, and his mother, and other young men who might be thinking of becoming firefighters.

Nadine Rhule, Taylor’s mother who lives in London, told The Gleaner that she is happy that they have considered giving her son a national honour.

“When I saw the video of the rescue I think he was awesome, I think he deserves recognition, it’s a matter of living what you do, and showing bravery, I am do proud to be his mom,” she told The Gleaner.

“He did it not just for money but to save somebody’s life and I am really proud of him, I continued to pray for him, as a mom tears were just flowing when I saw his bravery, something I knew was in him from early,” she said.

Assistance Superintend Otis Rowe, who supervised the rescue mission, said Taylor was in a state of readiness because of the special training to which he had been exposed.

He said it was a typical special service call that was unique but well-planned out and executed properly by Taylor and the rest of the team.