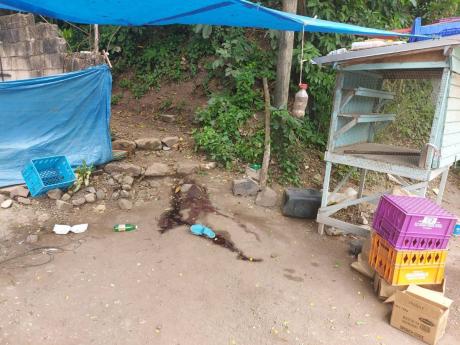 Photo by Roxroy McLean
The scene where Demoy Foster and Raymond Palmer were shot and killed on Tuesday. 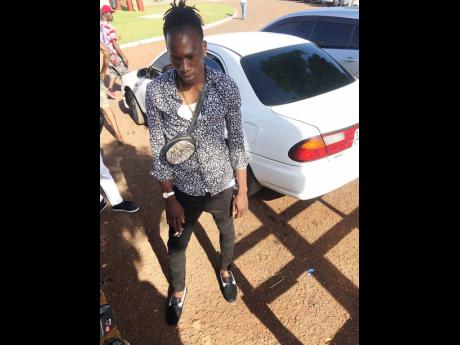 Contributed
Photo of 39-year-old Damoy Foster who was shot and killed in Gordon Town on Tuesday.
1
2

Blood still stains the road near the Gordon Town Road breakaway following a gun attack on Tuesday afternoon that killed two men and left two others hospitalised in what has been theorised to be a gang hit.

Dead are 27-year-old Raymond Palmer, who was killed on the spot, and 39-year-old Damoy Foster, who succumbed to his injuries at the University Hospital of the West Indies (UHWI).

Andre Jackson, 22 years old, and 37-year-old Dwight Green from Mavis Bank were injured and are currently being treated at the UHWI. Jackson is said to be in critical condition.

The men were reportedly standing among a group of persons at a stall at about 5:20 p.m. when several men armed with handguns approached the group and opened fire.

The stall was operated by Foster, who residents believe was the target of the hit.

A male resident who requested anonymity told The Gleaner that Foster received death threats after refusing to carry out the request of a gang.

His sister, Nicole Foster-Henry, said the stall was an extra hustle, in addition to the bar and shop he operated in partnership with the mother of his one-year-old child, just beyond Gordon Town Square.

Foster-Henry told The Gleaner that she was numb upon hearing the news.

“I was the first to arrive on the scene and to the hospital. I couldn’t react but mi feel everything inna mi move when mi close his eyes,” she said.

They are from a close-knit family of seven children from both parents.

Still in disbelief, Foster-Henry keeps thinking of how she could have been caught in the crossfire if she had stopped there on her way from work.

She recalled her brother as a jovial, positive person who was favoured among the youths in the community and known to discourage criminal involvement.

“Him stop smoke about three to four months ago, but even when him did a smoke him a encourage others not to start smoking,” she shared.

Foster-Henry recounted a youngster turning to her brother for advice while mulling over a decision to carry out an illegal act. Her brother’s good advice were reportedly effective in dissuading the young man.

Fond memories of Foster resurfaced as text messages streamed in to his sister’s mobile phone from community members recalling their interactions with him.

“Right now, I have to be trying to control my seven-year-old ‘cause all he talks about a him uncle. Every pickney love him,” she shared.