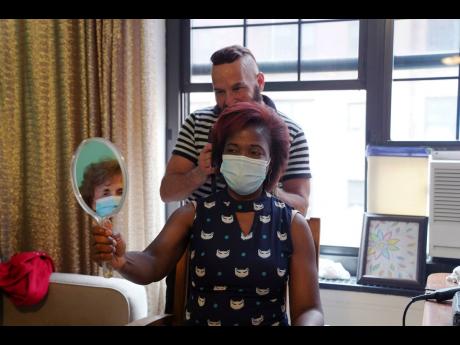 Roberto Novo has styled the hair of a constellation of stars, from singer Britney Spears to supermodel Naomi Campbell. But during the pandemic, he’s turned his talents to the heads of lesser-known, older New Yorkers – and he’s done it for free.

The Argentina-born stylist welcomes them to his Manhattan apartment or visits them in their homes. His two French bulldogs keep everyone company. He calls his initiative “Free haircut and puppy love”.

It started last summer when he and his dogs visited a client who had been isolated for months due to the pandemic. Seeing how happy it made her, he asked if she had friends in her apartment building who might be interested in a free hairdo.

“It doesn’t get any better than that – bring some joy to senior citizens in these hard times,” Novo said. “People really suffer with this situation right now. So if God blessed me [to help] with a simple haircut, making somebody happy, that’s a gift.”

On a recent day, Novo and his stocky, smush-faced dogs – Machitwo and a pregnant Tulula – walked into Marena Erdogan’s apartment and quickly turned the living room into a salon.

Sitting on a couch in a black cape, Madelon Spier waited to get her hair styled.

“I think he’s miraculous, an artist ... and we’re all pictures that he’s painting,” Spier said.

“There’s his personality and his way of cutting – a way of looking at a person and knowing what’s right for them,” said Spier, who copped to being in her “high 80s”.

“I’ve just been so deeply lonely through the (pandemic),” he said, and now, “I feel a lot better, actually. I wasn’t truly feeling very well when I came in here. It was great meeting, everybody. I had a good haircut.”

Scissors snipped. Dogs grunted. Neighbours chatted. And Erdogan added to the din by playing her white baby grand piano, though the melodies were sometimes drowned out by Novo’s blow-dryer.

Others took turns petting Machitwo and Tulula or held them in their laps. The loyal Frenchies stayed close to Novo, who occasionally bent to give them a kiss on the head.

As Novo finished a cut, Erdogan ordered pizzas that the group later shared. They talked and laughed.

“The power that we have with the scissors to bring happiness ... it doesn’t matter what age you are, that’s incredible.”