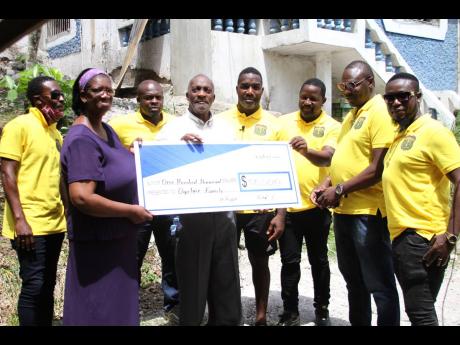 Nathaniel Stewart/Photographer
Carey O’Gilvie (front row, right), past caretaker and chef at Clarendon College (CC) and his wife, Patsy, give thanks to the Clarendon College Legends, a group of past athletes and DaCosta Cup players from CC for their presentation of a cheque of $100,000 to the couple who lost their house in a fire in January. In photo (back row, from left): Edward Campbell, Orlando Williams, Allien Whittiker, Carlton Akens, Dane Chambers (president) and Keron Wright. 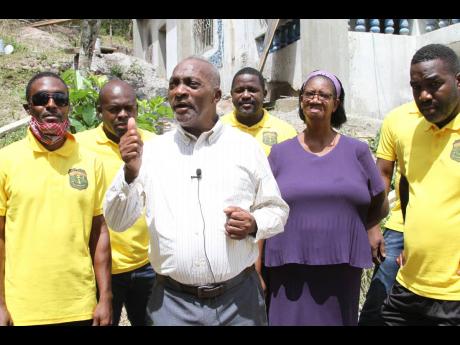 The last thing Carey O’Gilvie and his wife, Patsy, expected to come home to after an inspiring church sermon in January was their newly built home in Rose Hill, Clarendon going up in flames.

Before he even drove into the yard, O’Gilvie was greeted by anxious neighbours who broke the news that his house was ablaze.

“When mi almost reach mi yard, one man run and come sey, mi a call yuh from mawning and mi couldn’t get you,” he shared on the event that has left his family depending on the kindness of a friend who has given them temporary shelter.

According to O’Gilvie, because the grilles were locked, no one could get inside to put the blaze out. Added to that was the unfortunate fact that he had forgotten his phone at home and his wife had hers turned off.

O’Gilvie said he blamed himself, and wondered what had happened in his life to make him deserve such misfortune. “A look fi si if a do anything wrong inna di world, from mi growing up till mi come tun 75, and when mi look and find sey nutten nuh wrong against mi … mi sey well den mi a guh lef it to God,” he told The Gleaner.

The only items not destroyed were the outfits the O’Gilvies wore to church on the Sunday of the fire. A pair of second-hand shoes was also saved and was the footwear he wore to meet with a few past students who had offered to console him in his time of distress. O’Gilvie has fond memories preparing delicious meals for them while working as a chef at Clarendon College (CC). The boys, now men, are former athletes and members of the newly formed Clarendon Legends, and had decided to make the O’Gilvies the recipients of their first outreach.

Allien Whittiker, Group President Dane Chambers, Carlton Akens, Orlando Williams and Edward Campbell are just some of the 61 past CC football players who had participated in victories the school celebrated over the years. Keron Wright is a former athlete.

Formed in February this year, Williams shared that it was the unanimous decision of the Clarendon College Legends to make the O’Gilvies the beneficiary of a donation of $100,000.

“We decided to make them a priority as he (O’Gilvie) used to cook for the school teams. He played an integral role in how we grew up, foodwise. We certainly don’t want to have him living outside and wondering what will happen if it rains,” said Williams.

While assisting with repairs to the house was their first priority, the group promised that they would do whatever they can to help, even as they appeal to others to assist the outreach.

Commenting on the choice of name for the group, Williams said ‘legend’ is a powerful word that signifies a strong person with a strong character. It also captures the football team’s achievements over the years, as they all shared in the team’s glory in lifting the DaCosta Cup trophy at various times in the past.

“For us, it is all about uplifting, empowering, and supporting – that is what we are all about. We are here to support Clarendon College, and our aim is to mould young minds to make it better for the ones there now. That’s our aim for this group,” Williams said.