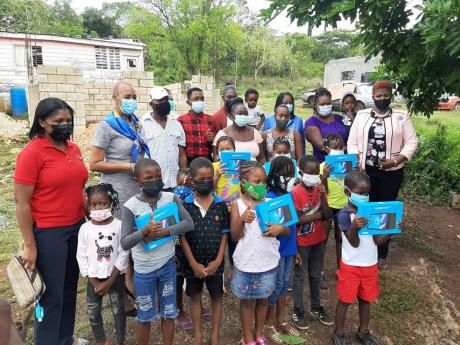 Carl Gilchrist
Education Minister Fayval Williams (second left) with Kevin and Kelvin Peart next to her, along with Senior Education Officer Karlene Segre (right) and others, join Kelvin’s students, who received tablets from the minister.

Kelvin Peart, the selfless Ferncourt High School third-form student who captured the hearts of Jamaicans after The Gleaner published a story highlighting him teaching young children in his community of Queenhythe, St Ann, says he is thankful for the tremendous response he has received.

Kelvin, who will celebrate his 14th birthday on October 4, converted an old bar at the front of his house into a makeshift classroom to teach students who are unable to access online learning.

The Kelvin Peart initiative has endeared him to the entire populace, it seems, and the response from individuals and businesses in Jamaica and overseas has been tremendous.

“It’s an amazing story, it’s a story of hope, story of resilience, story of just sheer character, because Kelvin has demonstrated what it means to be a help to his neighbour,” guidance counsellor at Ferncourt, Keno Thompson, told The Gleaner.

Thompson said Kelvin realised a need and went ahead and put out his all, showing “pure love” as he helped his community to become better.

Upon hearing the story, a lot of people came forward to help Kelvin and his students, numbering around 10. They included those from the community of Queenhythe, corporate Jamaica, parents and guardians, and others. Described by some as a breath of fresh air in the current pandemic, his initiative has received overwhelming support.

“I just want to thank everyone who came forward and supported me and the children here in Queenhythe,” Kelvin told The Gleaner.

“Special thanks to Gleaner Company, TVJ, Food For The Poor, Digicel and other corporate entities and individuals here in Jamaica and abroad. Also, I want to thank my principal Mr (Sheldon) Thomas from Ferncourt High School, Mr (Raymon) Treasure from York Castle, and my primary school principal Mrs (Roshell) Henry. I am overwhelmed by the show of support from everyone. I can hardly find words to express how I feel,” he said.

And according to his dad, Kevin Peart, the support coming for the children is a wonderful thing.

“The kids will be more comfortable; all those kids who didn’t have tablets and those stuff, they got them now. We say thanks for all the support for them. I’m overwhelmed, I’m so happy,” Peart said.

Williams donated several tablets and other supplies to all the students involved in the initiative and hailed the youngster’s effort.

“I want to applaud Kelvin, his parents as well, for allowing him to be able to do what he has been doing,” Williams told The Gleaner.

“It has come to our attention and I felt it was important to be here this morning to meet him to say, ‘Thank you for the work that you’re doing’. These children that you’re tutoring, you have no idea what the impact will be on them as they move along their educational journey, and to keep it up. We recognise what you’re doing.”

Golding said he was ‘blown away’ by what Kelvin has done.

“The work he is doing, by teaching those younger than him at a time of great need, is truly inspirational. It was a pleasure to meet him and his family, and I hope his story continues to provide fellow Jamaicans with hope for the future,” Golding said, adding that he and his team provided school supplies to the children, and a water tank for the family.

Ferncourt principal Sheldon Thomas said the school’s alumni will be assisting Kelvin with regard to transportation to school, given the distance between where he lives and the school.

Thomas told The Gleaner: “I’m very happy for him and proud of him; and what he has demonstrated is what our priorities are at Ferncourt High School, which is always to give back to our community.

“With Kelvin’s outpouring of his love for children, especially when I had discussions with him (he revealed), that he wants to be a paediatrician, it’s showing that he has a love for children. We’re going to continue to work with him so that even though he’s doing service in his community, we have to ensure that he reaches his goal of being a paediatrician.”

Roshell Parkinson-Henry , principal of Kelvin’s former school, Keith Primary and Infant, said she was ‘beyond elated’ and ‘so proud of Kelvin’.

Despite his heroics, Kelvin remains a shy youngster who was moved to tears on Thursday when the education minister and her team turned up at his school.

Founder and CEO of Lifeskills Publishing Anisa Wilson-Smith, citing the pressure the sudden attention might bring to bear on the teenager, has offered him a life skills scholarship, valued at US$500.

The following day they distributed several items they had collected , including food stuff, to residents of Queenhythe, who said they were extremely happy for the assistance from corporate Jamaica.