Embrace concrete as alternative to asphalt for farm roads – Shaw 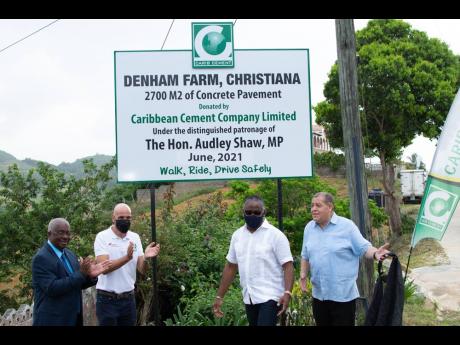 Contributed
Managing Director of Caribbean Cement Company Limited, Yago Castro (second left), is joined by Member of Parliament for Manchester North East Audley Shaw (right), at the official opening of a concrete road constructed by the cement company in Denham Farms in the parish on June 10. Others from left are Councillor of the Christiana Division, Desmond Harrison and Custos of Manchester, Garfield Green.

Minister of Industry, Investment and Commerce Audley Shaw says the use of concrete to build roads should be embraced as an alternative to asphalt in the construction of farm roads.

Concrete roads are durable and safe and are less prone to wear and tear and does not suffer from defects like other road surfaces such as the loss of texture or potholes.

“Its not that I am saying that we’re going to stop using asphalt, what I’m saying is that we are going to begin embracing the technology of concrete roads. That is what we must do for our farmers,” he said.

“I am going to be promoting it to the Government as an opportunity to make our small farmers more productive,” Shaw added.

The North East Manchester member of parliament was addressing the official opening of a newly constructed concrete road by Caribbean Cement Company Limited in Denham Farms in his constituency on June 10.

Shaw lauded the cement company, led by its general manager, Yago Castro, for the road completion.

“I want to thank the cement company for their initiative, enterprise and contribution in putting this road together,” he stated.

Shaw also indicated that the residents of the farming community were appreciative of the work put in by the company.

Taxi operator Peter McKenzie also expressed gratitude to Carib Cement for the new road, pointing out that in the past, passengers had to disembark at the top of the community due to the previous bad road.

Meanwhile, in his remarks Castro continued the promotion of the concrete road solution because of its safety, longevity, and ability to withstand the vagaries of natural disasters such as hurricanes.

“Jamaica is a country that is exposed to harsh weather such as heavy rains and hurricanes. Having this kind of pavement is the right solution for the long term. We are trying to make our humble contributions as a company, step-by-step,” he said.

Completed at a cost of $13 million, the 600-metre concrete roadway will enable more than 50 farmers from the community, who cultivate crops such as sweet and hot peppers, yams, tomatoes, and Irish potatoes, to transport their produce more quickly to the market.

Over 40 people from the community were employed on the project and all materials sourced were from hardware stores within the community.

To date, over $20 million has been spent by Carib Cement on the construction of concrete roads in the parish of Manchester and brings the number to a total of three. The other two roads are located in Kraal and Litchfield.