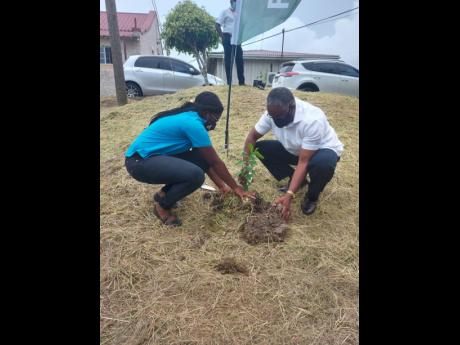 Contributed
Custos of Manchester Garfield Green (right), and Beth-Ann Dixon from the Forestry Department, plant a tree at the Percy Junor Hospital with on June 10. 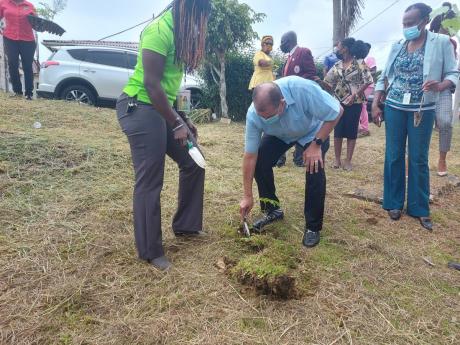 Contributed
Minister of Industry, Investment and Commerce and Member of Parliament for Northeast Manchester, Audley Shaw and senior director of Western Zonal Operations at the Forestry Department, Stephanie Cameron (left) plant a tree at the Percy Junor Hospital on June 10.
1
2

Minister of Industry, Investment and Commerce and Member of Parliament for Northeast Manchester Audley Shaw is encouraging Jamaicans to adopt the initiative of planting trees as not just a means to help the Government achieve its three-year goal to plant three million trees by 2022, but to foster wealth creation.

Speaking at the recent tree-planting initiative hosted by custos of the parish, Garfield Green, at the Percy Junor Hospital, Shaw said tasks such as these are of fundamental importance in achieving food security and environmental protection.

“Planting a tree today will establish our overall thrust for establishing food security for our future. The variety of trees facilitates various benefits. Fruit trees provide fruits for us to eat, but can also be sold in the fresh-fruit trade.

With the agro-processing industry significantly benefiting from the diversity of fruit trees planted, Shaw said the country must continue to look at its unique produce and package them for export.

The government recently resumed the exportation of mangoes to the United States with a 12,000-pound shipment and continues its 419,919 kilograms mango export to Canada annually.

Shaw said he has started the dialogue with several companies, including Grace Foods, to see to the proper packaging and ultimately the distribution of this dish.

As brands continue to announce an increase in products, with the most recent announcement from Lasco Manufacturing, chairman of the Southern Regional Health Authority, Wayne Chen said those in the baked-goods industry have admitted to seeing a decline in sales during the peak seasons of several produce.

Senior director of Western Zonal Operations at the Forestry Department, Stephanie Cameron, said, since April 30, just under 537,000 tree seedlings have been distributed and planted.

She said the tree nursery in Williamsfield, Manchester, will provide 10 ornamental and timber seedlings free of cost to anyone in the region desirous of planting for the initiative.

Cameron added that persons across the island interested in securing seedlings for planting projects may send an email to the Forestry Department at: fdinfo@forestry.gov.jm