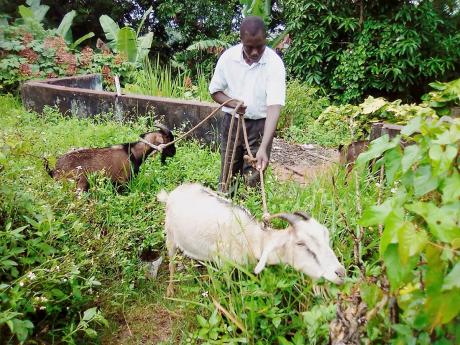 Photo by Ruddy Mathison
Aston Gayle tending to his goats in Springfield, St Catherine, on Saturday. He has been the victim of praedial larceny, losing six goats recently. 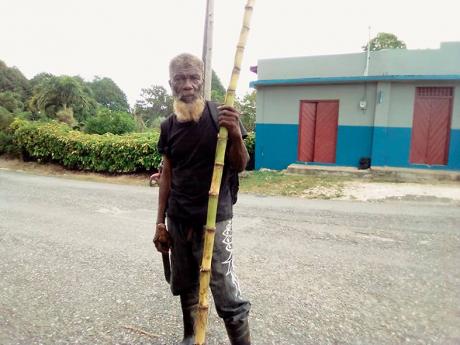 George Bryce, a 67-year-old farmer of Springfield in Guy’s Hill, St Catherine, is livid about the plunder of his livestock by praedial thieves.

Just recently, he said he lost seven cows – three bulls and four heifers – one of them valuing more than $250,000.

Bryce and personnel from the Guy’s Hill Police Station are in dispute about whether he made a formal report, but his narrative is part of the refrain of regret that haunts Jamaican farmers, many of whom do not bother to engage investigators because of the presumed low likelihood of catching the thieves.

Aston Gayle, another Springfield goat farmer, had the shock of his life when he discovered that six of his herd valuing about $60,000 had gone missing.

“Only the rope mi see. It is a regular thing in the community, but mi neva know it would reach mi. Don’t care how wi report to the police, nothing nah happen,” Gayle told The Gleaner.

Gayle now resorts to waking up even earlier than before to take his livestock deep into wooded areas to graze to keep them from the longing eyes of thieves. He said that sometimes he doesn’t even bother to take them back home because the risk is greater there.

Annual farm theft in Jamaica is estimated at $6 billion, and the sector is dogged by chronic under-reporting.

Raphell Small, who plants yams and vegetables for the local market, said that goats are also the target of other predators.

With Parliament passing the Dogs (Liability for Attacks) Act 2020, Small will soon have recourse not only in civil proceedings, but criminal cases as well.

Owners of dogs found guilty of negligence could be fined up to $3 million in attacks.

Dwayne Reid has all but given up on livestock farming after sustaining losses on several occasions. He has turned to burning charcoal for his livelihood.

“Too much problems. It nuh mek sense wi raise animal free fi other people,” he stated.

That note of surrender is of concern for Assistant Commissioner of Police Gary Welch, who heads the Praedial Larceny Prevention Unit of the Jamaica Constabulary Force. He said that his team prosecuted 69 offenders in 2020 compared to 39 in 2019.

Despite the increase in prosecutions, that’s a drop in the bucket – an admission made by Deputy Commissioner of Police Clifford Blake in 2020 when reviewing 22 reported cases of praedial larceny for the five-month period January 1 to May 31.

“Whilst the figures at the stations might be true, off the top of my head, in St Elizabeth, where I am from, I could name you 22 cases since the beginning of the year,” Blake quipped in June 2020.

Welch, too, acknowledges that agricultural theft is under-reported in some police divisions but is playing up his unit’s success.

“Because of the focus that we have placed on praedial larceny, making it a major crime, it is paying off big time,” he said.