Public gets ‘window’ into smart cities 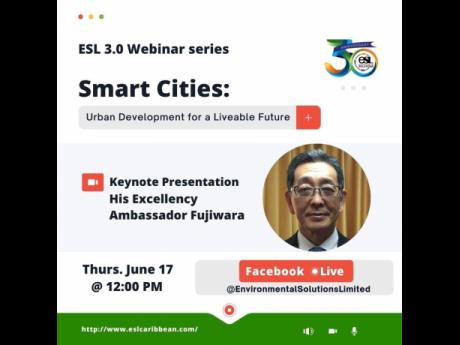 THE PUBLIC will today have the opportunity to gain insight into what it means to plan for and operate smart cities, and at a time when the sweltering heat of the days and nights serves as an uncomfortable reminder of the bruising reality of a changing climate.

The webinar, hosted by Environmental Solutions Limited (ESL), is being held under the theme ‘Smart Cities: Urban Development for a Livable Future’. Beginning at noon and streamed through the consultancy firm’s Facebook page, the session will feature a keynote address from Masaya Fujiwara, Japanese ambassador to Jamaica.

Among other things, the webinar is expected to look at environmentally friendly cities with low carbon, recycling, and energy-consumption efficiency; urban development centring on public transport systems and reducing the dependence on cars; and resilience building against natural disasters with disaster risk management systems like early warning and emergency communication systems within cities.

Chairperson and chief executive officer for ESL, Eleanor Jones, said there is no doubt the public will be able to benefit.

“Growing population and densities in urban areas need to pay attention to best practices, especially as we like to pride ourselves on playing well in global arena. We need to learn from approaches elsewhere and see what we may be able to adopt and adapt within our reality and in keeping with Vision 2030 and the Sustainable Development Goals,” she said.

Information out of the United Nations Environment Programme (UNEP) also points to the value of exploring the subject of smart cities, with estimates suggesting that cities are responsible for some 75 per cent of global carbon dioxide emissions, “with transport and buildings being among the largest contributors”.

Emissions of carbon dioxide and other greenhouse gases through the transportation, manufacturing and agriculture sectors, for example, fuel global warming, which in turn ‘fire’ impacts, including extreme weather events, such as hurricanes that threaten lives and livelihoods.

“Only with a coordinated approach and action at the global, regional, national and local levels can success be achieved. It is essential, therefore, to make cities an integral part of the solution in fighting climate change. Many cities are already doing a lot by using renewable energy sources, cleaner production techniques and regulations or incentives to limit industrial emissions. Cutting emissions will also reduce local pollution from industries and transport, thus improving urban air quality and the health of city dwellers,” notes an article headlined ‘cities and climate change’, posted to the UNEP website.

The webinar also comes as various stakeholders, local and overseas, continue to champion the need for a prioritised, comprehensive response to climate change, in line with Sustainable Development Goal (SDG) 13, ‘take urgent action to combat climate change and its impacts’.