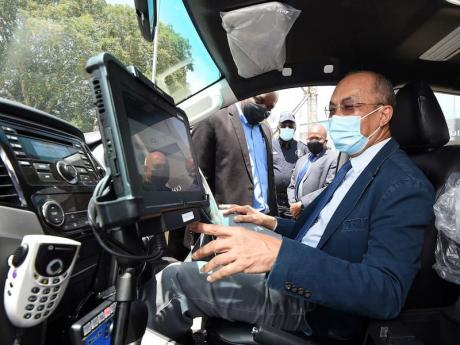 Dr Horace Chang, (right) Minister of National Security, inspects one of the new vehicles that were handed over today. (Ian Allen photo)

National Security Minister Dr Horace Chang today said the Government would be ramping up efforts to break the back of crime as he handed over 47 new pick-up trucks and 73 motorcycles to the Jamaica Constabulary Force.

Chang said that the new units, valued at approximately $186 million, will be deployed across the island to improve response time as the police seek to apprehend criminals.

“The police are aware and are sensitive to it and we are taking steps to ensure that we can apprehend the [criminals]. This Government will continue to provide the tools to interrupt and undermine criminal activity and apprehend violent criminals,” he said at a function at the Office of the Police Commissioner on Old Hope Road in St Andrew.

It will provide counselling, protection and aid for victims of domestic violence, who will then be referred to a shelter under the Ministry of Gender Affairs, where they will be placed in a safe environment.

Police Commissioner Major General Antony Anderson said the police are hoping to have at least 10 such centres operational by the end of the year.

“We have four up and running. There are three in Area 5 and one in Area 4. We have another six to be done by the end of year. We are working with the United Nations Development Programme Spotlight Initiative on that. It's really a joint venture," he said.

"We are already in the process of retrofitting some of the other locations in a similar fashion to the one at Matilda's Corner. When we finish these six, I see us having one in every police division so that we can offer that service and safe place across the country,” Anderson said.