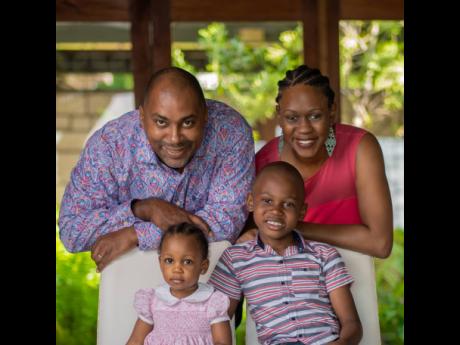 Julian Robinson keeps his cool in the most challenging circumstances, but since becoming a father, patience has become a mantra for the third-term member of parliament (MP), who often finds himself in family witness box, being questioned by his child.

That child is his soon-to-be seven-year-old son, Patrick Julian – ‘PJ’ for short – who takes his first name from his two grandfathers – one a distinguished jurist at the International Court of Justice, Justice Patrick Robinson, and Patrick McIntosh, the now-retired former Alcan and Windalco bauxite company executive. His second name is that of his dad, and maternal uncle.

Robinson is also father to soon-to-be two-year-old Amara, a nursery schooler whose words are more pronounced and who is expressing herself in short sentences.

Amara, whose name means ‘everlasting’, is unlike her brother –”very different, and a lot more obedient, and will follow our direction much more than her brother. Inquisitive, and strong-willed and bawls out loud when she does not get her way, but more responsive to instructions and while not talking fully, she understands everything said to her”.

But, not so for his firstborn, who takes on the posture of defence and prosecuting attorney in his small frame, often relegating the parliamentary committee chairman and shadow minister for finance to the witness box.

Robinson describes as “extremely challenging” the balancing act as dad and elected representative.

“My son and I have a bedtime routine for 8 o’clock. I tuck him in and read a story, after which he says his prayers. He insists on that, and he will call me to find out, once it’s 8 o’clock, when I am coming home to do that. So the first big change is that your time is no longer your own,” he said last week.

“It has severely impacted my time, but it’s not something I am complaining about. I do pick-ups and drop-offs, and it’s a responsibility I enjoy. I don’t see it as a burden and it is not something that I – we – regret at all,” said Robinson, who also spoke of the busy schedule of his bank manager wife, Mariame McIntosh Robinson.

With twice weekly football and swimming as well as once weekly music (which he does not like), Robinson said PJ is as energetic as he is inquisitive.

“You have to have a good temperament, even in the times when you feel like losing it,” he said with a big chuckle, and describing mornings as posing challenges.

With his routine and theirs, which include his morning run and they getting ready for school and nursery, trying to avoid traffic often causes “arguments”, especially with “PJ”, who would rather watch the television than eat his breakfast, shower, and get ready.

Robinson said parenting and fatherhood today is nothing like when he was a boy.

“At six, I could not have any conversation with my parents if they told me to do anything. Now, it’s almost like you have to give a reason why you have to do this and can’t do that. It’s a totally different era from the one that I grew up in. It’s a lot of discussion and he holds a lot of big-people discussion with his mother and I,” said Robinson.

Among his many concerns, their safety is paramount.

For years, he was walking from Hope Pastures to Mona to visit his cousin, and neither he nor his parents were worried for his safety. But not so in 2021 Jamaica – a country that has become increasingly violent and unkind to children.

He wants them to get a good education, show compassion, understand their society, and become meaningful contributors to their society.

Recalling one evening about three years ago while driving with PJ, Robinson said he received reports of a fire in Swallowfield, a section of the St Andrew South Eastern constituency he represents. Weeks after, the child was asking about the individuals and how they were coping.

Such empathy pleased his father, who wants Jamaica to be a better place for all its children.