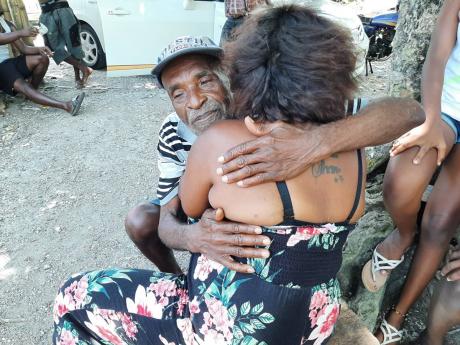 PHOTO BY CARL GILCHRIST
Rupert Wachope comforts one of his nieces, Keisha Silvera, on the passing of her father, Leric Silvera.

The family of a St Mary man whose death the police reported on Saturday as a case of suspected suicide is dismissing the suicidal claim, saying that he got along well with everybody and never appeared to have had any problems that would lead him to take his own life.

Several family members expressed the view that the death was not a suicide.

The deceased, Leric Silvera, 63, was discovered hanging from a tree with a piece of rope tied around his neck in Crescent, near Jack’s River, St Mary, last Thursday morning.

At the same time, family members are also dismissing a section of the report that said the deceased had texted his daughter earlier in the day and stated he intended to take his life.

While grieving for their father who died just a few days before Father’s Day, siblings are insisting that the record is set straight.

One of Silvera’s daughters, Tricia, told The Gleaner that her father never texted anyone to say he was going to take his life.

“That’s a lie!” she said. According to Tricia, Silvera called one of his sons at 3:26 on Thursday morning, after which he called her at 3:45 a.m.

“Him call me and me open the line, mi nuh hear him,” Tricia outlined. “Mi say ‘Daddy,’ him nuh answer; mi say ‘Daddy’, him answer. When him answer him say ‘Hoy.’ Mi say wha do you now? Him say, ‘Mi have one likkle problem’. That’s all mi hear from him. By the time mi fi say, whe yuh deh? him hang up. Mi never have no credit fi call him back.”

“Then the woman (Silvera’s common-law wife) call mi other sister and tell har say Daddy come out a the house, she cyaa find him,” she added.

Given the strange occurrence, family members set out to search for Silvera and found the body hanging at around 5:15 a.m.

“Mi cyaa come to, all now. It hurt mi wicked, wicked, wicked. I’ve never been through this, never know say time like this would a come, bredda. Di whole a wi, gran’ pickney, daughter, everybody and him have good relationship. We call him if we have any problem an’ we and him talk. Right now all the grand pickney dem bawl every minute, every minute.”

“If you can find the next word fi sad, that’s where it is,” Tricia’s husband, Richie, added.

According to her: “Yuh know it hurt fi know say mi cyaa call mi fada an’ see mi fada and tell him happy Father’s Day? An’ him nuh do nobody nutten, bredda, and a this him get?

Mi fada nuh do nobody no wickedness. Mi fada prefer gi yuh the laas wha him have and do without. An’ him ever a smile ... no care wha problem him have, him ever a smile.”

Another of Silvera’s daughters, Keisha, also expressed how badly her father’s death is affecting the entire family.

“We cyaa feel good over dis yah situation,” Keisha said. “None a we, bredda an sista, nor nobody cannot feel good over this because this ya situation is not just like this, that a wha mi sure ah, mi naw ask.”

“Mi fada walk all the way from Bonnie Gate come down, walk pass him house go round a bush an yuh look pon him clothes yu not even see one burr pon him clothes, if a through the bush him walk then; so suppn nuh mus’ wrong? That can’t be natural,” she argued.

“If him tek the bush from dung deh so, and walk gwope him would a burr up. So dis cyaa right. But God a God,” she expressed.

Rupert Wachope, one of Silvera’s several siblings, described him as his favourite.”

“And fi come get this news now and hear this, mi nuh feel good,” Wachope said. “I’m not feeling well from I hear. Mi jus a wait fi God come tell me what cause it,” he added.

Police investigations continue into the incident.