GoodHeart: Sustainable development taken to next level by teen-run initiative 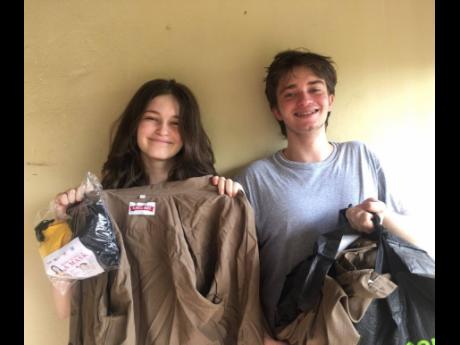 Contributed
Maria Greenland (left) and brother, Rhys, are overjoyed as they show off the first UniCycle donations for 2021.

In its fourth year, UniCycle Jamaica is ready to assist students in need with school uniforms, data cards, and school supplies for the 2021 academic year. The teen-led and run initiative has opened donations and they are optimistic about their uniform, mask and data card targets.

“I am predicting that the school model will be a hybrid one, and there is a need for more uniforms and masks,” Rhys Greenland, outreach manager for UniCycle, told The Gleaner, as he encouraged people to donate gently used or new school uniforms to schools and students in need.

For the first two years after UniCycle was started, the initiative was aimed at collecting khaki school uniforms for donation. When the pandemic hit, they diversified, adding masks, data cards, school supplies, and even white shirts for girls. They are grateful that the pandemic did not impact their collection. In fact, the uniforms collected last year — approximately 300 khaki school uniforms — exceeded the number of uniforms donated in 2019 and helped them to hit the target of collecting and distributing a total of 1,000 khaki uniforms since inception.

Anticipating that next term, schools will utilise some sort of hybrid model, Greenland, who manages UniCycle’s day-to-day operations with the assistance of his sister, Maria, said there is still a demand for uniforms during the pandemic, specifically khaki shirts. He is encouraging everyone to get the word out about the uniform initiative, as the more people participate, the more uniforms will be given. “Most schools require students to use their camera and be dressed in their uniforms, to make the upper part of their bodies visible,” he said.

Online learning is still high on UniCycle’s agenda. The initiative will provide data cards to students with no Internet access for online classes. The Digicel Foundation, a sponsor of UniCycle, will donate the data cards and schools supplies. Unicycle’s other sponsors include Fontana Pharmacy, Food For The Poor Jamaica, L.P. Azar, Joseph’s and the Housing, Opportunity, Production and Employment (HOPE) Programme.

While Greenland focuses on UniCycle’s current drive, he has joined another initiative. He is the head of Cut and Toss, which he says is similar to Unicycle. “UniCycle and the Cut and Toss are similar. UniCycle aims to give students who are in need, while Cut and Toss is an environmentally focused initiative,” said Greenland.

Cut and Toss was started in March as part of Campion College’s Green Generation Club when the production and purchase of masks increased. It asks people to cut the strings off their masks before disposal, so as not to negatively impact aquatic life. “The five seconds process of cutting the strings off the masks can go a long way,” Greenland said. He noted that the strings on the masks often end up in the sea, which can be a choking hazard for animals and gradually harm ocean life.

He told The Gleaner, “Marine life should be considered, especially in light of global warming, which has a higher impact on the sea than on land”. Cut and Toss is growing steadily and has received positive feedback on social media and from influencers. Greenland hopes to spread awareness of the initiative outside his school.

To donate, learn more or contact UniCycle Jamaica, visit @unicyclejamaica on Instagram or email unicyclejamaica@gmail.com. Donations may be made at Fontana pharmacies islandwide or at the main office of Campion College. To learn more about the Cut and Toss initiative visit @ccgreengen on Instagram.