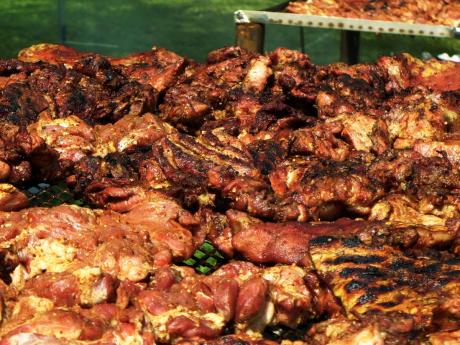 File
Florida Jerk Festival will have a special area called ‘The Jerk Experience’, where patrons may get a healthy serving of history, food and education. 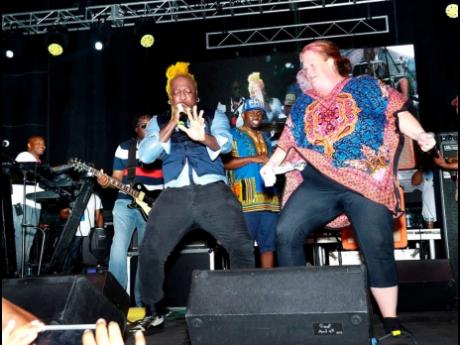 Contributed
Elephant Man tries not to be upstaged by a patron who joined him on stage at the 2019 jerk festival. 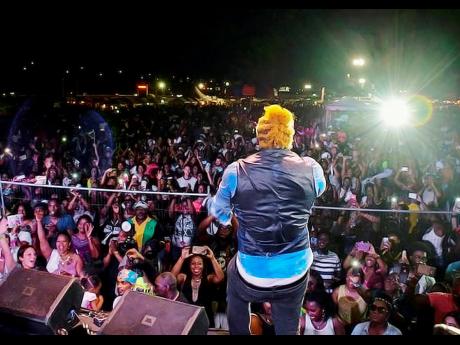 Contributed
Elephant Man maintains the energy as he delivers on stage. 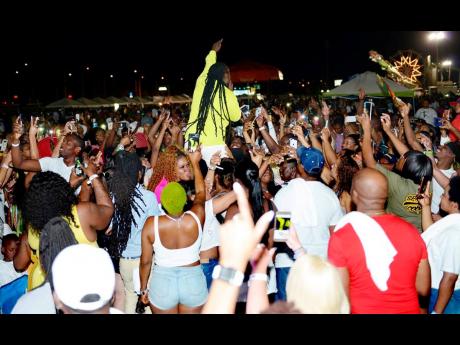 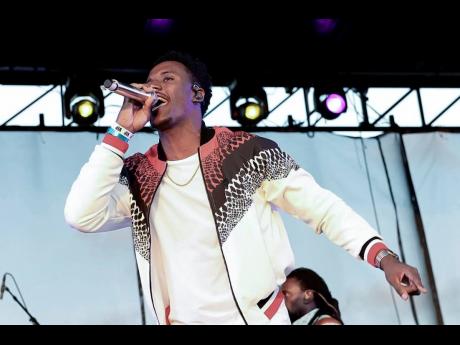 From backyard barbecue to city-wide fête, Florida Jerk Festival has grown from strength to strength. Returning for its 18th annual staging, after a one-year hiatus, the event has shifted from its original Memorial Weekend date to the Independence Day holiday. According to Damian Tater, CEO of the Florida Jerk Festival and one of six organisers behind the event, it was well-needed time for the team to restructure the brand. “I am going to be frank and say, while it was stressful, I was happy for the break,” Tater said. “I think it allowed us to rethink what the brand is, where it is and where it needs to be.”

The event, which has become the Mecca of Caribbean food and culture in Florida, was launched in 2003 as the Palm Beach and Orlando Jerk Festival by Full-A-Vybez Entertainment. It featured Florida’s top Caribbean restaurants and chefs offering a variety of culinary delights through cooking competitions. At the last staging, in 2019, an estimated 10,000 patrons attended, said Tater, and the organisers are anticipating an even larger turnout based on the new and improved offerings.

Tater told The Gleaner, “At one point, we were unsure of what direction we should take but knowing that Florida was one of the first states that opened, we thought it would be good to return. So, now we are back, bigger and better than ever. For those supporting the festival over the years, the usual date is instilled in them, but the beautiful thing is that we are still on a major holiday.”

When the festival had called the Meyer Amphitheater in Downtown West Palm Beach home for 10 years, it required the organisers to shut down streets to accommodate the large numbers. With the move to South Florida Fair Grounds located at 9067 Southern Boulevard in West Palm Beach, Florida, space was no longer an issue. He said the facilities are very accommodating, and it is centrally located.

“We are the first Caribbean festival since almost two years; people are looking forward to it coming this Sunday, July 4th. Adding the entertainers booked will generate even more excitement at the festival – we know this year’s entertainment experience will be a fun-filled one.”

Each year there are vendor booths selling jerk chicken, pork, fish and seafood, and not only Jamaican vendors, but an assorted selection from across the state of Florida to fill the many culinary and cultural appetites. “As the patronage is diverse, the food reflects that as well,” Tater said.

“It means everything to me, doing this event and watching it grow over the years, because at the end of the day, a lot of persons haven’t learned about our culture. I am excited about everything it is bringing to not just Jamaicans, but people from all walks of life,” the organiser added.

As safety is the top priority of the festival organisers, the recommended safety guidelines will be followed, and Tater assured that over 100 sanitation stations will be strategically placed throughout the event venue.

A new area has also been introduced, ‘The Jerk Experience’, where patrons may get a healthy serving of history and food education. Tater explained that there is a sampling of jerk items from jerk ackee and salt fish to jackfruit and the popular, crowd favourite, jerk ice cream, and for those who have no idea of the origins of jerk, “it is part of the educational experience”.

Food has always been one of the major attractions for the festival but, another big pull factor is the entertainment. “It’s not just about the food. Patrons, old and young, get a healthy serving of history, culture, and entertainment on the cultural stage,” Tater pointed out.

Over the years, there have been Jamaican acts such as Dexta Daps, Cocoa Tea, I-Octane, Busy Signal, Elephant Man and Romain Virgo, among many other reggae-dancehall stars. This year’s line-up features St Vincent’s soca hitmaker Skinny Fabulous, LUST – the dynamic group of singers Lukie D, Thriller U, Singing Melody and Tony Curtis – and Grammy Award-winning reggae entertainer Shaggy will headline on the main stage. Meanwhile, Jamaica’s Stone Love and producer/DJ Richie D will be at the controls.

“We are excited to bring Shaggy on board as the event headliner. His star power is exactly what our festival needs to generate the buzz of our rebranding,” he said, adding that the iconic collaboration the diamond-selling artiste has with Sean Paul and Spice is dominating the charts and airwaves. “As a family event, we also ensure that children are kept entertained at the Kid’s Zone, with a bounce house, carnival rides, and activities like face-painting and mechanical bull riding.”

Tater said that while most of his childhood years were spent in the US, he believes the concept of the jerk festival reflects “what it should (and would) look and feel like” for many Jamaicans in the diaspora as well as back home. For this, he credits the entire team.

“When you do a festival, it’s not a one-man show, and the team along with other persons work to make the event what it is. We all grew up playing at parties and basically saw where we had something to offer – that’s why we are here today. Together, we have made a lot of changes and doing the rebranding, brand new website, providing an offline and online experience. It is the perfect place to kick back and enjoy the culture,” he said.