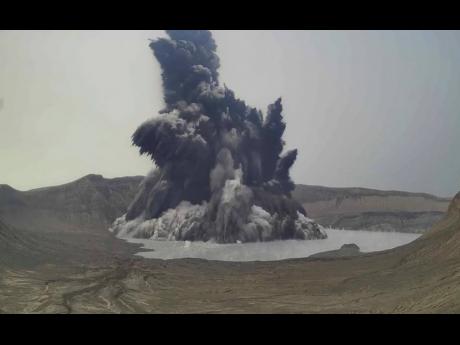 AP
A tiny volcano near the Philippine capital belched a plume of steam and ash into the sky in a brief explosion on Thursday, prompting an alert level to be raised due to heightened risks to nearby villages.

Thousands of people were being evacuated from villages around a rumbling volcano near the Philippine capital Friday, but officials said they faced another dilemma of ensuring emergency shelters will not turn into epicentres of COVID-19 infections.

The alert was raised to three on a five-level scale after Taal Volcano blasted a dark gray plume into the sky Thursday. The five-minute steam- and gas-driven explosion was followed by four smaller emissions, but the volcano was generally calm on Friday, volcanologists said.

Level three means ‘magma is near or at the surface, and activity could lead to hazardous eruption in weeks’, according to the Philippine Institute of Volcanology and Seismology. Level five means a life-threatening eruption is occurring that could endanger communities.

The agency asked people to stay away from a small island in a scenic lake where Taal sits and is considered a permanent danger zone along with a number of nearby lakeside villages in Batangas province south of Manila.

An eruption of Taal last year displaced hundreds of thousands of people and briefly closed Manila’s international airport. However, the volcano agency’s chief, Renato Solidum, said it was too early to know if the volcano’s current unrest will lead to a full-blown eruption.

The pre-emptive evacuations that began late Thursday involved residents in five high-risk villages in the lakeside towns of Laurel and Agoncillo.

More than 14,000 people may have to be moved temporarily away from the volcano, said Mark Timbal, a spokesman for the government’s disaster-response agency.

In Laurel town, Imelda Reyes feared for her and her family’s safety in their home near the volcano and in the crowded grade school-turned-evacuation centre where they took shelter Friday.

“If we stay home, the volcano can explode anytime,” Reyes told The Associated Press. “But here, just one sick person can infect all of us. Both are dangerous choices.”