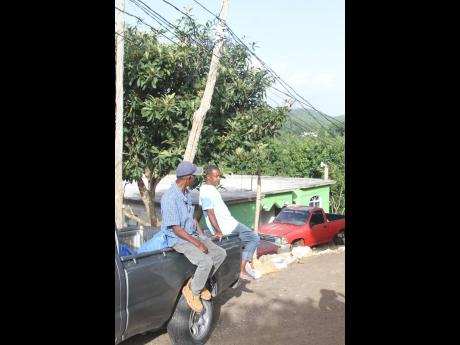 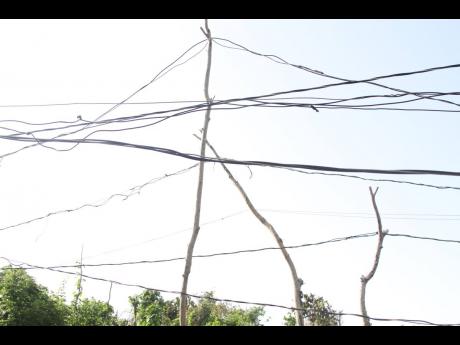 Nathaniel Stewart/Photographer
A web of illegal throw-ups can be seen in George Wilson, Craighead. Many residents in the Manchester community abstract electricity illegally. 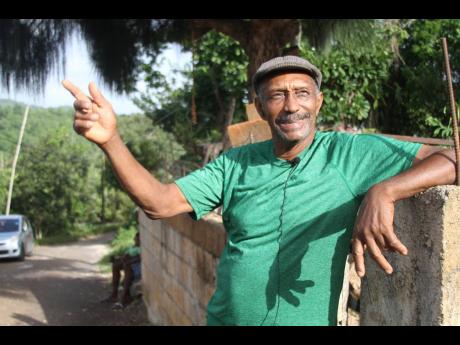 Nathaniel Stewart/Photographer
Maxfield Dennis of George Wilson in Craighead, Manchester, points to low-hanging wires in front his house. Residents are asking JPS to fund the buildout of infrastructure for the safe and legal transmission of electricity.
1
2
3

GEORGE WILSON, Manchester: More than 100 residents who have no registered electricity in the small community of George Wilson, Craighead, are appealing for local government authorities to fund the build-out of infrastructure to take them out of...

More than 100 residents who have no registered electricity in the small community of George Wilson, Craighead, are appealing for local government authorities to fund the build-out of infrastructure to take them out of darkness.

Danger lurks in the Manchester community with its makeshift utility poles and low-hanging wires fastened together with masking tape and wrapped around trees for additional support – signs of the virulent scourge of electricity theft that costs energy providers the Jamaica Public Service Company (JPS) more than US$200 million a year.

“Some time last year, some people – three sets of them – came and they measured up, but since then we haven’t heard anything. We expected that we would get some poles from early last year but [nothing] up to this point,” Dennis told The Gleaner.

With several poles and more than 600 metres of wire needed, residents were told that they would have to pool more than $2 million to fund the electrification project.

But that is an impossible task, said Dennis.

“No rich folk live here, just poor farmers struggling, trying to make two ends meet. But if we have the light, we can pay the bill,” Dennis said.

Fewer than half the community have been facilitated by the JPS for electricity supply, and those located beyond the metered pole admit to occasionally stealing power.

NO CHOICE BUT TO STEAL

Citing damage to appliances because of power outages and voltage swings, Dennis said that residents had no choice but to steal electricity. They feel abandoned – like they “are on the back end of a cow”, he said.

“That post break yesterday (Monday), and they have to tie it [with wire] and put it on a tree. They cut new pole, but it is heavy, so we have to tie rope on it, tie it on a truck and draw it come here to put up ... .

“In the corner there where the JPS wire is, if the breeze blows too hard, fire in the trees down there. They came, cut the trees and left, but the wire is too slack.”

For the month of June, the JPS removed 1,301 throw-ups in six communities across the parish, with Craighead accounting for 481 throw-ups.

Councillor of the Craighead division, Omar Miller, said he has been lobbying on behalf of residents for the past six years but continues to face difficulties.

The Rural Electrification Programme morphed into the National Energy Solutions Limited, which folded in 2019 after it was hit by a corruption and nepotism scandal. Its mandate has been divested to the Ministry of Local Government and Rural Development.

Miller is appealing for the JPS to fund the project and has flagged safety hazards in the community.

“The raw wires are there and it is very dangerous. You have children who are home. They are very curious. They are climbing trees, and every day I say to myself, ‘I don’t know what I would do if I heard that one of them was electrocuted,’” the councillor said.

“... I want this issue to be dealt with, and I don’t want the want the persons there to suffer.”

But JPS Director of Corporate Communications Winsome Callum said such a request was out of the company’s “normal scope” and that the local government ministry would have to assume those responsibilities.

“The provision of a quote is, therefore, consistent with our policy regarding the treatment of line extensions to locations further than 100 metres from the JPS power-delivery infrastructure,” said Callum of the overall $2-million estimate.

“Electrification of communities like Craighead would be done in collaboration with the Ministry of Local Government and Rural Development, which now has responsibility for rural electrification. We therefore encourage the residents of Craighead to have dialogue with their local representatives to see how best their request for electricity can be accommodated under the ministry’s programme.”