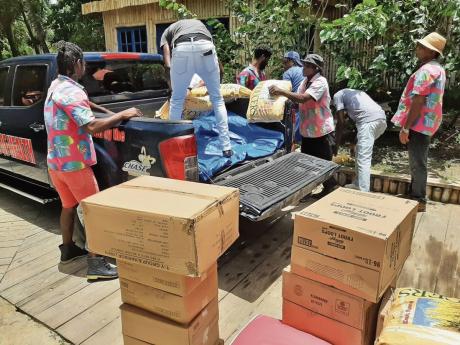 Contributed
Some of the donated items being uploaded into a pickup truck. 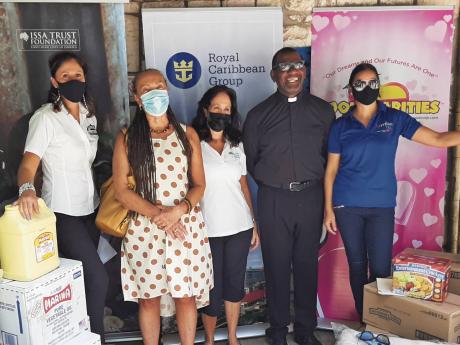 Over $5 million worth of food supplies were distributed on Tuesday to over a dozen local organisations, thanks to the collaborative efforts of Issa Trust Foundation, Cool Charities, and Royal Caribbean.

The supplies were distributed in direct response to needs created by the impact of the COVID-19 pandemic.

The effort saw two containers of frozen and dry goods being delivered to Bamboo Blu Restaurant in Ocho Rios, which stored and then distributed the items that included 4,750 kilogrammes (kg) of fish, 230 kg of rice, 680 kg of beans, 700 kg of vegetable oil, 1136 kg of flour, 57 cases of breakfast cereal and 16 cases of bread. Other items included utensils and sanitising products and medications.

Dexter Thompson, external alliance specialist at the DCS which received the bulk of the items, told The Gleaner he was very heartened and grateful for the donation, as it will supplement the diet of some of the over 4,000 inmates in its care.

“We try our best to be self-sufficient, but we can do so much and no more, so this will help in what we’re doing to ensure our inmates get the proper diet that they need,” Thompson said.

“We’re talking about fish and beans and flour and rice, these are some of the things we’ve received so it makes a big difference to what we can provide in addition to what we already have,” he added.

Father Howard James, Catholic priest at the Lady of Fatima Catholic Church in Ocho Rios, collected items for his and other churches, including Methodist, Baptist, United, and Church of God, which will distribute to members of their congregation who are most needy.

“We’re in tough times and this will certainly help the different churches and their people to get something at this time; we’re pleased to be a part of this,” Father James said.

Daniel Gibson of Cool Charities and Bamboo Blu Restaurant, which stored the items after the shipment arrived in Jamaica, handled all the logistics of the local operations.

“We are absolutely happy to help as we’re always looking for ways to give back to the community and do our part in Jamaica,” he said.

The Issa Trust Foundation, which has donated millions of dollars worth of medical equipment and supplies to the local health sector over the years, was getting involved in other areas of charity for the first time.

Paul Issa, chairman of the foundation and also deputy chairman of Couples Resorts, said he was only too happy to be part of this project.

“The Issa Trust Foundation is very happy to have facilitated this donation of food by Royal Caribbean Group to Jamaican entities in need of assistance, especially during the COVID-19 pandemic, which has caused unprecedented hardship worldwide,” Issa said.

“We are also very grateful to Cool Charities for their assistance in this endeavour,” he added.

“We’re very happy to do this,” Valli told The Gleaner.

She said the move started several months ago and finally culminated in Tuesday’s distribution.

“I think it was a very good action from Royal and with the help of Alex Ghisays and Asha Issa and their organisations, we could realise this and make some people happy in this very hard time,” she added.