Comfort residents hope to have stigma of crime removed 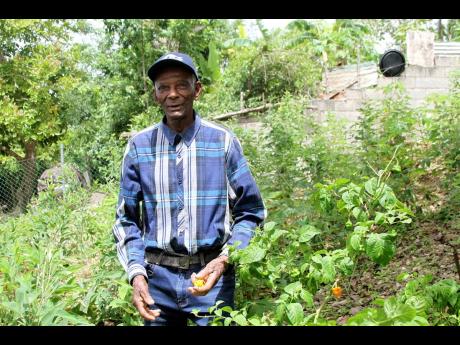 The once quiet, averagely populated community of Comfort has now gained notoriety as a one of the parish’s hotspots for crime and violence, ranking among areas on the police’s radar for gang-related activities, shootings and reprisal killings.

In May, the police released the names of 25 individuals from the area as persons of interest, following the implementation of a 24-hour patrol manned by heavily armed security forces.

Just weeks before the operation, there was a shooting incident and the murder of a resident, 43-year-old Shawn Pryce, just days apart.

However, despite the alarming incidents, residents believe the positives of the community far outweigh the negatives- which should not be used as a measuring stick.

The Gleaner caught up with the oldest resident in the area, 93-year-old Eustace Gordon, who shared what life was like before now.

“It wasn’t always like this. With all this crime that is happening now, those things never happened back then. Those days, you get up and walk from morning until day light [the next day]. You never had the fear that you have now, and you could even walk from this district to other communities.”

Gordon, who still does his small-scale farming in the area, said he has never entertained the idea of moving as Comfort is no different from other communities that at some point, have had incidents of crime.

“I am not really fearful. You hardly see anywhere that if you move from here you going to see better. I don’t see that ... . I wouldn’t go anywhere and they ask me where I come from and I give them other district name. Me a tell them say me come from Comfort. Me nah hide where me come from.”

The senior citizen’s wish, having raised his children and built his life in the area with no regrets, is that things will not get worse and peace will reign.

With much to offer, according to chairperson of the Comfort Community Development Committee Delroy Hudson, the sporadic flair-ups of violence should not trump what is right with the community.

“There are over 30 stakeholders linked to the community. We have a cricket team that six times, have won the parish finals and are presently leading the Social Development Commission competition. We have a lot of high school achievers. Every year, the church gives out over 60 awards to persons who have achieved educationally. The Northern Caribbean University came here and did a parenting workshop and persons were certified. We had Heart NSTA come here and do a housekeeping course and 56 persons received Level One and Two certificates.”

He said that through the Universal Service Fund, a total of $1.6 million was granted to build the community’s computer lab, and the Chase Fund made funding available to fence the community centre.

“It is far from the truth. the stigma that is attached to Comfort is not as it is. In the early 2000, we had a flare-up violence and a few murders here. Somewhere about 2007, we have Comfort being listed as a ho spot with Greenvale in Manchester.”

But Hudson said that when the survey was done, it showed that the issues did not lie within the community, but with migrant criminals.

“It wasn’t resident fighting against resident, but it was the scammers and outside influence. Comfort people are a proud set of people, and it is daunting how this has stigmatised us.”

He said the dream is to return the area to the peaceful place it was and eliminate migrant criminals who seek to mar the area.

“The last shooting we had in Comfort, is no one in Comfort. The criminals are gone, and now we are left with the situation of repairing it.”