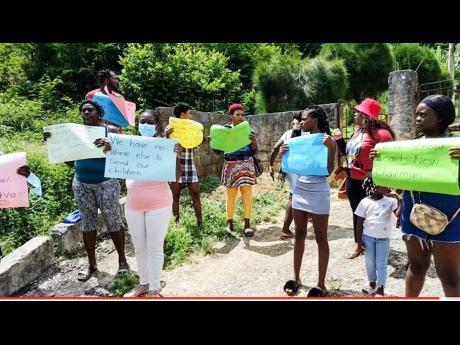 Tamara Bailey
Resident protesting the impending closure of the Bigwood Early Childhood Institution in the Craighead community on Sunday.

Residents of the Craighead community and surrounding areas continue to protest the impending closure of the church-owned Bigwood Early Childhood Institution, and the removal of the board chairman and pastor of the affiliated church, who they are accusing of poor oversight.

Dozens of individuals turned up on the property of the Church of the United Brethren in Christ in Craighead, where the school is located, on Sunday to express their disapproval with the board chairman’s decision.

Principal of the institution, Rosalyn Daley, said she was told that the school will be closed for a year to remedy a long-standing issue of bat infestation.

However, Daley said this is not the right call as students would have already been out of school for a year, during which time, she said, the issue should have been rectified.

“The rat bat has been there for a number of years because they are a bit stubborn. We came here [last] Monday and took down the ceiling and sprayed it. The other minor issue we have is that the bathrooms need to be painted and light put in, and we were going to address this for school reopening in September.”

Daley maintained that the issues the school currently face are not reasons enough for a closure.

Daley, who said she started the school in 1987 in the vestry of the church and later, through the assistance of the founder, secured a school building, said she cannot allow the students and parents to suffer as a result of poor oversight.

“When the founder migrated, other pastors came to the church but they never interfered in the school, which is on the same property as the church. But we have a new pastor now and when he came, he took up the chairman post of the school without being elected, and since then there is no community member on the board and no parent-teacher association.”

She said the school has always managed to finance itself through a number of fundraising initiatives and continues to receive assistance from the community, parents and past students.

Daley added that she believes the one-year closure may be a ploy to close the school permanently.

“We have 25 students and 11 graduated. The pastor said we should not register any new students for September and we have a lot of children in the community that supposed to start school September ... . We teach children coming from as far as Coleyville and Chudleigh. The school is in the heart of the community.”

She said if the school closes, parents who cannot afford to send their children to school miles away, and those whose income is dependent on proper functioning of the school will suffer.

“School out from March and what people are saying is that the chairman had ample time to address the problems that are at the school, and they are saying if school close down one more year, it won’t reopen. I am hoping with this protest something good will come out of it. The community is willing, past students are willing to give their assistance for the school to remain open.”

Several calls to the chairman of the board and pastor of the church, Andrew Blake, went unanswered.