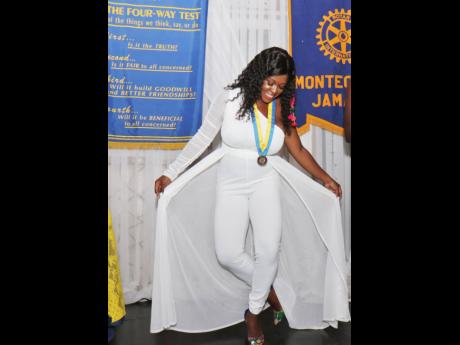 Ashley Anguin
Amber-Gail Grandison, the newly installed president of the Rotary Club of Montego Bay, takes a bow after her official installation into the position during the annual installation ceremony, held at Day-O Plantation Restaurant & Bar on Saturday evening. 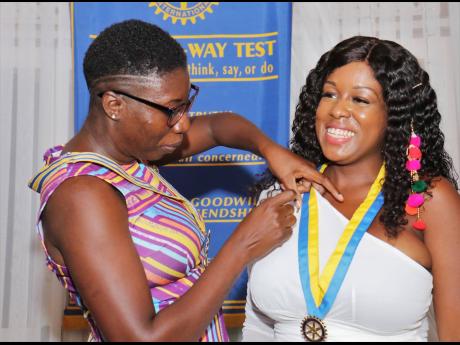 Ashley Anguin
Amber-Gail Grandison, the newly installed president of the Rotary Club of Montego Bay, gets her presidential pin attached by Cortia Shepherd during the annual installation ceremony at Day-O Plantation Restaurant & Bar on Saturday evening.
1
2

IT WAS against a backdrop of elegance, charm, and humour at the Day-O-Plantation in Montego Bay on Saturday evening, that 33-year-old air traffic controller Amber-Gail Grandison created history by becoming the youngest president in the annals of the Rotary Club of Montego Bay.

Grandison, who is now the 60th president of the organisation, is also the 14th woman to lead the Montego Bay-based service group since its inception in 1961. In addition, she is the only president who has transitioned from the Rotaract Club (junior) of Montego Bay to the Rotary of Montego Bay.

“I feel excited but I know I have a lot of big shoes to fill so it won’t be a walk in the park. I know I have to come good and put in all the work because all eyes will be on me to represent the club well,” said Grandison. “I joined the club in 2018 to serve because there was something missing from my life. Being a part of the club means belonging to something that is greater than me. Finding my role and purpose is what allowed me to achieve this goal as president.

According to Grandison, she is fired up and motivated as she has some major projects on her agenda to tackle.

“My major project this year will be partnering with Food For The Poor to build a house for a family in need. This project will require a major fundraising activity in which I will need a lot of support from everyone. Our club is like a mustard seed; although we are small in numbers, we achieve great tasks,” said Grandison.

Outgoing president Nana Boakye-Agyemang, who served one year, 2019-2020, spoke highly of the new president and her confidence in her capacity to serve the organisation well.

“I am a part of the new administration and I will continue to support the new president with her plans moving forward. She is ready and deserving of where she is now because, I must say, she is an organised person who is innovative, creative, and tech-savvy,” said Boakye-Agyemang. “When she was my secretary, she was the engine behind the scenes, so I believe this helped in preparing her for the position she now holds.”

Janet Silvera, the president of the Montego Bay Chamber of Commerce, who was the keynote speaker, said she was quite thrilled to see a young person stepping up and taking on the mantle of leadership.

“I am especially pleased to see such a young person take the helm this year, because, in my opinion, that demographic is in desperate need of attention right now,” said Silvera. “As you know, crime has been one of the major issues plaguing the city of Montego Bay, and it is heart-wrenching to see how many of our young people are left vulnerable to all sorts of crimes.”