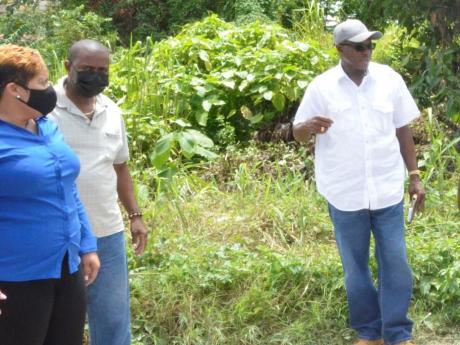 Minister without Portfolio in the Ministry of Economic Growth and Job Creation, Everald Warmington (right), looks at the condition of a section of the Bamboo main road in St Ann during a tour of the parish on Tuesday, July 27. Looking on are Member of Parliament for North West St Ann, Krysral Lee (left) and Councillor for the Dry Harbour Division, Councillor Carlton Rickets - Contributed photo.

The Ministry of Economic Growth and Job Creation will be undertaking repairs to road infrastructure in St Ann at an estimated cost of more than $400 million.

Over $200 million will be spent to carry out works on several roads, drains and bridges, with priority attention to be given to roadways such as Hampstead to Mount Arrarat, Priory to Bamboo, Cardiff Hall to Tripoli and Islington to Bengal.

Minister without Portfolio in the Ministry, Everald Warmington, who toured sections of the parish on Tuesday, informed that $45 million has been approved to commence long-standing rehabilitation work on roads in the Lewis community.

He also shared that $25 million will be allocated to carry out “urgent” river training work at Sleepy Hollow near Bamboo, while $8 million has been earmarked to effect repairs to drains in sections of Bamboo.

In addition, Warmington informed that funding will be procured to fix the Red Carpet Bridge in Dumbarton and the Discovery Bay Bridge that have been undermined.

“These are two other items that we will have to look at very urgently to ensure that the problems we have there are corrected and the citizens of the constituency are protected,” he said.

Meanwhile, he said that infrastructure works will be undertaken on the Runaway Bay to Brown's Town thoroughfare, which is estimated to cost $225 million.

He noted that the project will be carried out in two phases.

Member of Parliament for North West St Ann, Krystal Lee, said she is pleased with the priority attention being given to roadways in the constituency.

“We know that these are challenging times and we know that COVID has definitely impacted our economy… but we're very grateful that the Ministry is able to help us with so much,” she said.