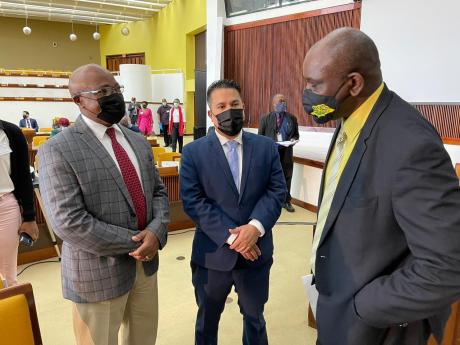 From left: Head of the Department of Correctional Services, Lt. Col. (Retired) Gary Rowe, Minister without Portfolio in the Ministry of National Security, Matthew Samuda and Permanent Secretary in the Ministry, Courtney Williams, having a discussion just before the start of the orientation session for the Board of Visitors and Parole Board at the Jamaica Conference Centre in downtown Kingston on July 28, 2021 – Contributed photo.

Among several policy enhancements to be enacted by the end of 2021 is the National Offender Management Policy, which, according to Permanent Secretary in the Ministry of National Security, Courtney Williams, will play a significant role in reducing Jamaica's rate of recidivism.

“The policy will help us to build a stronger culture within the correctional system. A culture of rehabilitation. It is only through an effective rehabilitation culture that we will achieve 40 to 10,” the permanent secretary explained yesterday during an orientation session for the Board of Visitors at the Jamaica Conference Centre in downtown Kingston.

The board, which comprises civilians, was established to monitor the operations of adult and juvenile correctional and remand centres within the Department of Correctional Services, while the Parole Board serves to enhance the rehabilitation and reintegration of criminal offenders into society.

The permanent secretary added that over the last three years, Jamaica's rate of recidivism has averaged approximately 40 per cent, which the Ministry is working to reduce to 10 per cent, in less than nine years, in alignment with the Vision 2030 National Development Plan.

“Previous measures to address the problem of recidivism have not worked satisfactorily. The policy will help us to build a new and stronger culture of rehabilitation within the correctional system. We must also significantly improve our case management system so that we can, as accurately as possible, identify the appropriate rehabilitative treatment for each ward and inmate,” he emphasised.

Meanwhile, Minister without Portfolio in the Ministry of National Security, Matthew Samuda, added that in a punitive justice system, all stakeholders will need to work to improve the culture of care and rehabilitation in the corrections department.

He said an influential factor in the appointment of a Board of Supervision was “triggered by a particular incident”, citing the case of deceased inmate Noel Chambers.

He noted that there were several layers in the correctional department that provide protection, but there are disjointed systems that need to work more cohesively, coupled with the need for improved legislation, digital and infrastructural changes.

“There is a short term solution which is dependent largely on the activities of the BOV, to help hold the DCS and by the extension, the government accountable”, he said.

In addressing the board, Samuda said, “the greatest metric that determines our success is the recidivism rate. Regardless of where you fall in the rehabilitative system, we expect your work to have a positive impact and be reflected in our duty of care to our inmates and wards”.

He explained that there are emerging discussions in the public domain surrounding sentencing guidelines and the Government of Jamaica will, in the coming months, tackle reform through the policy direction outlined by Deputy Prime Minister and Minister of National Security, Dr Horace Chang in that regard.