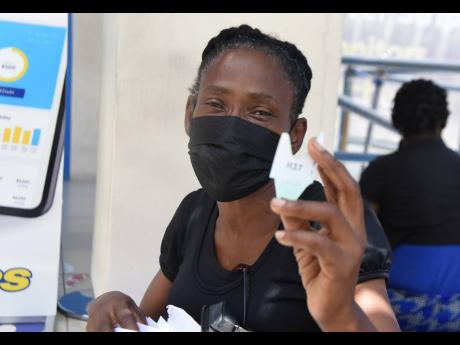 Kenyon Hemans/Photographer
Moreen Stewart was upset about the pace of customer service at JPS’s Ruthven Road office on Thursday.

The NWC registered a total score of 80 per cent, edging the Jamaica Public Service Company (JPS), 76 per cent; followed by FLOW, 70 per cent; and Digicel, 68 per cent.

The survey was conducted by Market Research Services Limited from September 2020 to January 2021.

More than 140 contacts, aged 18 to 60, were dispersed across four target suppliers in various locations. They made contact with each company location twice by using each modality.

Contact was made during three periods: peak and off-peak seasons and during the middle of the month.

However, as customers cramming the narrow pavement outside of the JPS’s Ruthven Road, Kingston, office shielded themselves from the scorching midday sun, they complained about poor customer service. Most customers outside reported waiting for at least two hours on Thursday.

Long wait times have been the bane of many utility customers for years, but that malady has worsened during the COVID-19 pandemic with its social-distancing protocols.

One customer who requested anonymity said she had been sitting outside from after nine on Thursday morning, awaiting her number to be called.

“Sometimes a one likkle day you get do your something,” the woman said at noon, three hours later.

Slow service was cited especially on Mondays, Fridays, and towards the end of the month, customers said.

“When you come dem day deh, hundreds a people,” exclaimed one person.

Ann Marie Sutherland described customer service as “slack”, noting that persons became infuriated and started to berate the security guard at the door a few moments before The Gleaner arrived.

Glovalyn Champagnie said that she has been trying to resolve an Internet matter since January. She expressed concern for the elderly waiting to be seen.

Failure to offer clear answers to customers was also a major hurdle.

Companies have been urged to customise arrangements for special-needs customers, including the provision of designated lines and infrastructural changes.