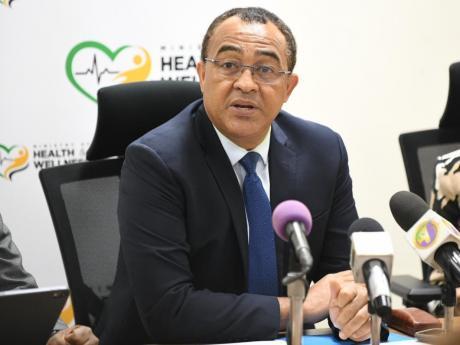 Minister of Health and Wellness, Dr Christopher Tufton has revealed that the COVID-19 hospitalisation rates for young people in their 20s and 30s have been steadily increasing in recent weeks.

He stated, “We are seeing more young persons with COVID and more younger persons going into hospital…and that is worrying for us. This includes some young people who are also on oxygen. It should be a message that says all of us are vulnerable.”

Tufton explained that unvaccinated people continue to vulnerable due to the continued mutations of the virus. “As the strains develop, it reacts differently to different people. While the overwhelming number of persons who are very ill are over 60, we are seeing younger persons now that are being affected.”

While Jamaica has recorded no cases of the COVID-19 delta variant, experts have warned that it is only a matter of time before the outbreak reaches Jamaica's shores.

Data from the United States Centers for Disease Control and Prevention have revealed that the those between the ages of 18 – 49 represent the largest increase in COVID-19 cases due to the prevalence of the Delta variant. As of July 24th, people aged 18 to 49 were the largest demographic hospitalised for COVID-19 in the United States.

As a result, Tufton is urging Jamaicans, especially young people, to take the vaccine. This call has been heeded by a number of persons including 18-year-old Kimberly Hamilton and her 20-year-old boyfriend Jordon Levy, who received their first vaccine doses at the Mona Ageing and Wellness Centre.

Kimberly explained that she took the vaccine because she had to protect other Jamaicans.

She told The Gleaner, “I personally do not like needles so I was scared to take it. People around me were saying that they don't really trust it because it came out so quickly…But it has to be done for the protection of the elderly.”

Jordon echoed the same views as he waited beside her as she received her dose.

“I just felt like it was time to take it. Any young person out there, just come out and take your vaccine. We need to free up the place, man.”

Eighteen-year-old Siya Kirpalani has also stressed the need to take the vaccine due to the spike in COVID-19 cases.

Dr Denise Eldemire-Shearer, who is responsible for the Mona Ageing and Wellness Centre, has indicated that she has seen a “tremendously positive” response from persons especially those between the ages of 18 and 30. Over 1,000 persons registered for Saturday's vaccination blitz at the centre. Thus, she believes that the daily target of 1,500 persons will be met.

The same could not be said for the National Arena vaccination centre. Errol Green, regional director for the South East Regional Health Authority expressed his disappointment with the turnout by midday as 350 jabs were given even though the daily target was 1,000 persons.

However, Minister Tufton anticipates that despite the rocky start, the feedback across the country has been positive. “Six hours after the announcement, we had about 10,000 Jamaicans who were registered online. That is good. We want to keep that going…This period is going to be the true test of vaccine hesitancy,” he stated.