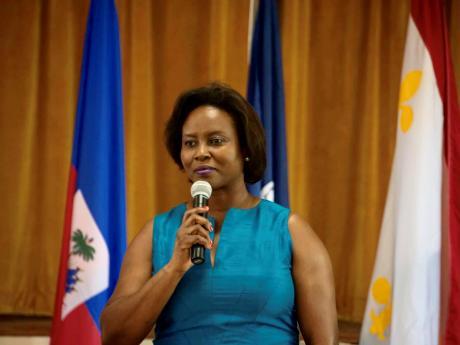 MIAMI, MC – The wife of the assassinated President of Haiti, Martine Moise, has hinted at the possibility of contesting the elections for the president of the country, less than a month after her husband, Jovenel Moise, was gunned down at their private residence overlooking the capital, Port Au Prince.

“President Jovenel had a vision and we Haitians are not going to let that die,” she told the New York Times newspaper, adding that she is seriously considering a run for the presidency, once she undergoes more surgeries on her wounded arm.

Moise was flown to Miami for treatment after the assassination of her husband on July 7 but returned a week before his official funeral.

She told the New York Times that those who killed her husband, had come to the private residence looking for a particular document.

“They were looking for something in the room, and they found it,” Moïse said, adding that she did not know what it was.

She said that none of the assassins spoke Creole or French, the language associated with Haitians, adding the men spoke only Spanish, and communicated with someone on the phone as they searched the room. She said before they left the house, one of the killers stepped on her feet and another waved a flashlight in her eyes, apparently to check to see if she was still alive.

“I would like people who did this to be caught, otherwise they will kill every single president who takes power. They did it once. They will do it again,” she told the newspaper.

Haitian authorities have arrested nearly 30 people, including three Haitian Americans residing in Miami, in connection with the assassination.

Moise had been governing by decree since last year, and before he was replaced, interim prime minister Claude Joseph had said that presidential and legislative elections would be held on September 26 with the second round set for November.

Earlier this month, 71-year-old neurosurgeon, Dr Ariel Henry became the country's seventh prime minister since 2017, even as the opposition parties refused to accept his position as the person given the task of leading the country ahead of the presidential and legislative elections.

At his swearing in ceremony, Henry said he had planned to meet with various sectors of society to build a political consensus to address the problems Haiti faces.

“It is in the context of extreme polarisation … that we must find and implement a lasting solution to the multifaceted crisis with which we are confronted,” he said.

In her interview with the New York Times, Moise, 47, questioned the absence of the 30 to 50 men who were usually posted at her house whenever her husband was at home.

She said also none of his guards were killed or even wounded.

“I don't understand how nobody was shot,” she told the New York Times, adding that Haitians should remember her husband as a man who stood up to the rich and powerful.