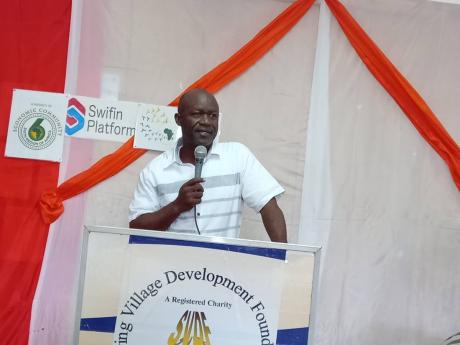 An initiative by Eco-6 and the Jamaica Luminary Secretariat (JLS) is seeking to help farmers across the island.

The project’s goal is to distribute 10,000 passion fruit seedlings along with fertiliser to farmers, institutions and entities in the next two years.

It is anticipated that as a result of this project, direct diffusion of the produce into the agro-processing industry, with a specific focus on the fruit juice sector, will occur in a timely manner.

Hugh Johnson, president of the Eco-6 (Economic Community of the African Diaspora Sixth Region) told The Gleaner that the organisation has been assisting farmers to get back on their feet.

“We want to help the farmers of Jamaica to go into value added operation where they will not only be the primary producer, but to take the product to the end user and that’s what we are about,” he said.

Johnson said the goal is to ‘walk the farmers’ through the process, from planting, reaping and seedling to the end product on the supermarket shelves in the form of delicious passion fruit juice produced by them.

“That is what we are about so we are here presenting to this group of farmers their seedlings, fertilisers and whatever they require to start their production,” he said.

Johnson further stressed the importance of farmers from the various parishes organising themselves in groups, he said it makes it easier when time for harvesting comes.

While they will not be turning away interested individuals, Johnson said it is better to be involved in groups as during harvesting, the trucks would be going all over the parishes to pick up boxes “so they can have enough in one location for economy of scale and easy pick up”.

Johnson said he is encouraged by the response they have been receiving from the farming communities.

Working with their local arm, JLS, Eco-6 has been giving individuals in Africa and the diaspora access to its stimulus programme.

Jamaican farmers, through Eco-6 Lumi (official currency for the Economic Community of the African Diaspora Sixth Region. It is issued by the Africa Diaspora Central Bank and its member state financial institutions), will be able to access a monthly stimulus payment equivalent to US$100 in Lumi payment which can be spent through their partners.

“The COVID crisis that has caused additional hunger and suffering on the populous Eco-6 out of the gratitude and the need for enabling the African family to live a better life, they have been giving the monthly stimulus to the diaspora across the globe,” he said.

He informed that JLS has been formed to register people on the platform with their mobile wallet in order for them to be able to access their stimulus package.