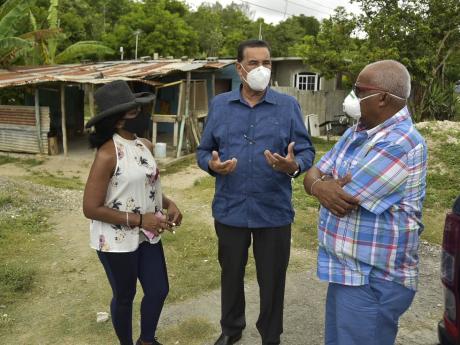 Minister of State in the Ministry of Local Government and Rural Development, Homer Davis (centre) is in conversation with Member of Parliament for Eastern St Thomas, Dr Michelle Charles (left), and councillor for the Dalvey Division, Michael McLeod while on a tour of the Cheswick community in the parish on July 28, 2021 – Contributed photo.

Minister of State in the Ministry of Local Government and Rural Development Homer Davis is encouraging residents of communities slated for improvement works under the Government's Rural Development Programme, valued at $650 million, to embrace the initiative.

Davis said for the works to be successful, persons need to “monitor the projects to make sure that what was said is what is being done”.

He was speaking in the community of Cheswick in St Thomas last Wednesday, which is one of five beneficiary communities under the programme.

The others are Chamber's Pen in Hanover, which is the pilot community; Banks in Clarendon; Cheesefield in St Catherine; and Lawrence Tavern in St Andrew.

The state minister informed that surveys are being carried out, at the completion of which plans will be presented to the residents to get their input in the implementation of the upgrading projects.

He noted that the studies for Chamber's Pen are complete and within the next two months a plan will be presented to the residents.

Davis said that youth training will be undertaken as part of the programme.

“We will be focusing on young people who are not so engaged in any calling or skills training,” he said, adding that the Ministry will also be working with the Poor Relief Department to improve conditions for needy persons.

Davis was accompanied on the tour by technical personnel from his Ministry, councillors from the St Thomas Municipal Corporation, and Member of Parliament for Eastern St Thomas, Dr Michelle Charles.

Charles expressed pleasure at the work to be undertaken, noting that she welcomes the training of the young people.