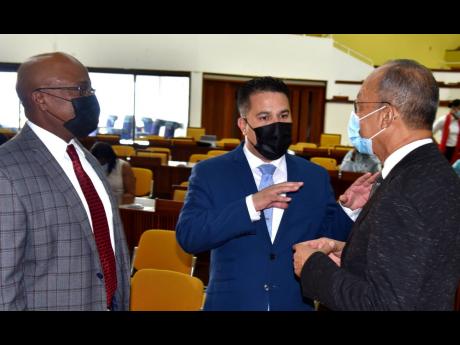 Contributed
Minister of National Security and Deputy Prime Minister Dr Horace Chang (right) in discussion with minister without portfolio in the Ministry of National Security, Senator Matthew Samuda (centre), and Commissioner of Corrections, Lt Col (Ret’d) Gary Rowe, during the orientation session for members of the Board of Visitors and the Parole Board at the Jamaica Conference Centre in downtown Kingston on Wednesday, July 28.

Lands have been identified for construction of a new state-of-the-art correctional facility to replace the Tower Street Adult Correctional Centre located in Kingston. The new structure is expected to cost at least $8 billion.

This was revealed by Minister of National Security and Deputy Prime Minister Dr Horace Chang, following the orientation session for members of the Board of Visitors and Parole Board, at the Jamaica Conference Centre in downtown Kingston on July 28.

“Tower Street is to be replaced. We are going to build a new prison … . It’s an expensive programme, so we had to slow down a bit [due to] the economic realities, but it is not suitable for occupation in the long run,” he said.

The decision has been taken to relocate the facility, as it is in need of major reworking, Dr Chang said.

“Tower Street was a slave trade post. It was never designed for regular occupation,” he said. In 1845, the British colonial government commissioned the facility into a prison.

Chang noted that while the discussions are at the early stages regarding construction, the new modern facility “will be a properly designed prison that will be secure and meet the standards required for occupancy in all areas”.

Meanwhile, he thanked the chairman and members of the Board of Visitors and the Parole Board for making themselves available to serve, noting that their service is critical in ensuring there is a responsive correctional process and a relevant rehabilitation mechanism.

He said the Department of Correctional Services (DCS) is an important component of Jamaica’s national security architecture.

The Department of Correctional Services Board of Visitors is charged with the responsibility for overseeing the care offered and conditions of the correctional facilities. It is required to make reports to the minister with responsibility for the DCS and has the power to make unannounced visits and inspections at the centres.

The DCS Parole Board is responsible for reviewing prisoners’ applications for parole, to determine whether they can be safely released.