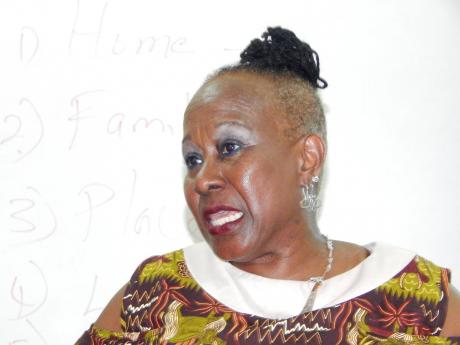 Professor Opal Palmer Adisa, university director of the Institute for Gender and Development Studies, Regional Coordinating Office at University of the West Indies, is hailing the passage of the Sexual Harassment [Protection and Prevention] Act, 2021.

The legislation was passed in the House of Representatives on Tuesday, July 18, and Adisa believes that this landmark piece of legislation will go a long way in ensuring equal protection for both men and women in the workplace.

She told The Gleaner, “I am very pleased because we have to make sure we protect our citizens, not just women and children. The Sexual Harassment Bill really shows our determination to achieve gender equity and gender justice.”

The regional coordinating office for the Institute of Gender and Development Studies has played a pivotal role in providing submissions to the Joint Select Committee that was appointed to examine the bill.

Adisa explained that the institute received a six-month spotlight grant in December 2020. This enabled her office to work with the United Nations Development Programme to review and make recommendations on a number of legislations.

These included the Domestic Violence Act, the Child Care and Protection Act, The Trafficking in Persons (Prevention, Suppression and Punishment) Act and the Sexual Harassment [Protection and Prevention] Act.

A major personal victory for her and the institute was the increase in the length of time for which a complaint can be made to the Sexual Harassment Tribunal. She stated, “Initially, it was for 12 months and we had recommended 10 years. They reduced it to six years, and that is a big difference between 12 months and six years.”

Adisa is also pleased that the committee accepted the institute’s recommendations to expand the definition of the workplace and increase the fines for breaches. She explained that the initial fine was for $10,000, but now the maximum penalty that can be incurred by violating the bill’s provisions is $1 million. Additionally, the institute also welcomes the provision that all employers, regardless of their size, must introduce a sexual harassment policy.

Professor Adisa stated: “The Sexual Harassment Act is much more gender equal so men, women and children are equally protected under it. If a man faces sexual harassment, he has the same protection as women who are sexually harassed.”

She is recommending that intermediary mediation be included before cases are referred to the tribunal, and anticipates that the bill will pass in the Senate.

Adisa is now looking ahead at the enforcement and evaluation systems for the law. “Jamaica is not the only one that is very bad in this regard. We might pass laws but we don’t necessarily have a system of enforcement and implementation,” she expressed.

Thus, she welcomes the announcement by Minister of Culture, Gender, Entertainment and Sport, Olivia Grange, to introduce a process to monitor the implementation of the bill.