‘Every little thing gonna be alright’ 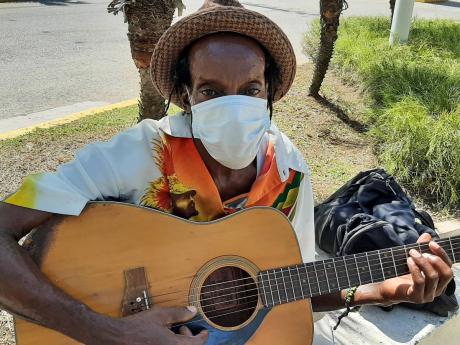 Carl Gilchrist
Morris James plays his guitar along the promenade which leads to the cruise ship pier.

While many persons in the tourism sector were rejoicing at the return of a cruise ship to Ocho Rios on Monday, and prepared to offer Jamaica’s best attractions, cuisine and other points of interest, one man had not much but was prepared to give of it anyway.

Morris James, a resident of Stewart Town, St Mary, woke up early Monday morning and journeyed to Ocho Rios just to be there when the ship, Carnival Sunrise, docked.

Armed with his guitar, his voice and the ability to strum a few Bob Marley and Dennis Brown songs, he was hopeful his offering would be a big enough attraction that could earn him a few bucks for the day.

It would not be any life-changing amount, but maybe it would be enough to buy food for a day. And it would be a fair day’s work.

He had been down that road before. Prior to the pandemic putting a stop to cruise arrivals in Jamaica, he would make his way to Ocho Rios on ‘ship days’ and play his guitar and sing. He at least covered his taxi fare each time.

For the last 17 months though, things have not been bright, and so it was a joy for James when he heard, last week, that a cruise ship would be docking on Monday.

“Yes, I’m happy the ship is back,” James told The Gleaner, his voice seemingly ringing with hope as he sat on a bench along the promenade that leads to the pier.

“I’m here because I used to play music for the cruise ship, like when the people come off the ship,” he explained. “Mi play some Bob Marley, Dennis Brown, my songs and other songs, yuh nuh. That’s what I do for a living.”

“When the ship stop, I don’t come down here much because I don’t have that feeling again,” he added.

So, after nearly a year and a half he was back. He was located near the end of the road that leads to the pier, the furthest point away. It was by design. He was not allowed to go closer. It was also where guests from the cruise wouldn’t walk, as they were picked up on the pier and taken to the various attractions for which Ocho Rios had come to be known. It was not looking bright for him.

He was asked to give a little taste of what he does.

He moved instantly into Marley’s Three Little Birds. It seems he might be trying to find solace every time he sang the refrain “Every little thing gonna be alright.”

It was shortly before 10 a.m. He hadn’t made a dollar up to then. A few metres away, taxi drivers and security personnel argued. Every little thing, hopefully, gonna be alright.