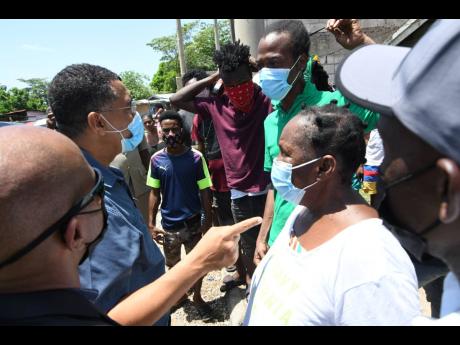 Rudolph Brown
Prime Minister Andrew Holness speaks with the families of Bell Rock, off Olympic Way in West Central St Andrew yesterday about the fully furnished one-bedroom units the government will provide for them, after fire destroyed their homes in 2018. 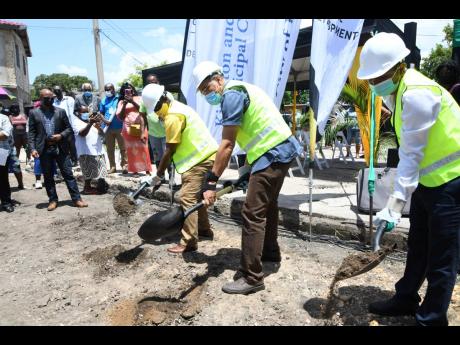 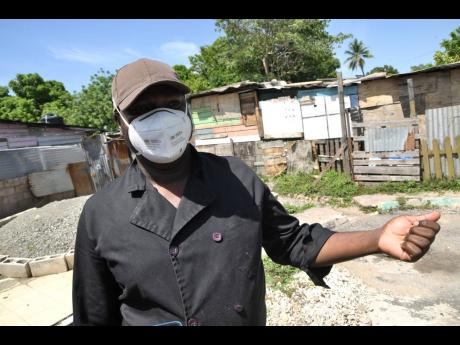 Rudolph Brown
Daniel Barton is happy to be getting a roof over his head. 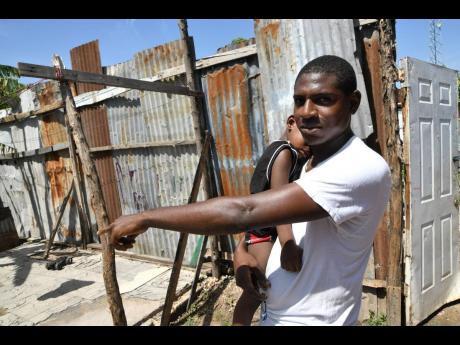 Rudolph Brown
Alrick Benjamin and his family anxiously await the construction of their new home.
1
2
3
4

Twelve families, many of whom have no place to call home, will be provided with fully furnished one-bedroom units – complete with a bathroom and a kitchen – in the coming months under the Government’s indigent housing programme.

The beneficiaries are among some 30 residents of Bell Rock, off Olympic Way in West Central St Andrew, who were left homeless on November 28, 2018, after armed men entered the home of Andrew McLean, otherwise called ‘Peter’ and ‘Killa’, firing multiple shots and later setting the building ablaze. The fire spread to neighbouring houses.

Alrick Benjamin, 26, has lived in Bell Rock for eight years with his two children and girlfriend.

At the time of the fire, he was at home with his now five-year-old daughter.

“I felt sad ‘cause I worked hard to build my house and I saw everything go up in flames,” he said of the concrete and board dwelling.

Benjamin, a delivery assistant at a manufacturing company, was able to renovate the concrete section of the home about eight months after the fire, but is looking forward to the furnished home his family will receive soon.

“It will be better and the children will have their own room,” he said with a smile.

Daniel Barton recalled that on that fateful day, it took hours for the fire brigade to arrive on the scene.

“Me stand up right cross di road deh suh a watch di whole a di house dem a burn up. Mi couldn’t do nutten. Everything bun up, every single thing,” he told The Gleaner yesterday, adding that since the fire, he has been living with a friend.

Barton added, “I’m a bit optimistic and at the same time just watching what is happening because it can take more time than what they have said. Me nuh wah get mi hopes up.”

Another beneficiary, Shelton Blake, has been living in Bell Rock for 17 years.

He was at home but did not manage to save anything due to the intensity of the blaze.

Blake has since rented a room in a nearby scheme and his sister has helped him to secure some furniture.

“Mi feel good cause seh me a get back a place cause a rent me a pay now,” the 47-year-old said.

Minister of Local Government and Community Development Desmond McKenzie said construction will take three to four months, at a cost of $37 million.

He shared that the Andrew Holness-led administration has committed to building 100 indigent homes across the country during this financial year.

The Ministry of Local Government will also be providing $60 million to councillors to assist constituents with housing repairs.

“This is an investment that is being made in you. It is your tax dollar that is being used to help you in the time that you need it most. I urge you to treat it, love it, because what we are going to be building will be the first of its kind in the programme,” McKenzie said.

Meanwhile, Prime Minister Andrew Holness apologised to the beneficiaries for not fulfilling his promise of providing them with homes, with “great speed”.

“It was a logistical nightmare and a technical and engineering nightmare to come up with a solution. We now have a proper sewage solution and we have a proper housing solution,” the prime minister stated.

“We are still looking for lands so that we can take down some of the houses that were built 20 years ago, which are in a terrible state, and relocate some of the people, but still within proximity of the area, and that will be an ongoing exercise.”