This virus is no joke

Parents brave inclement weather to get their children vaccinated 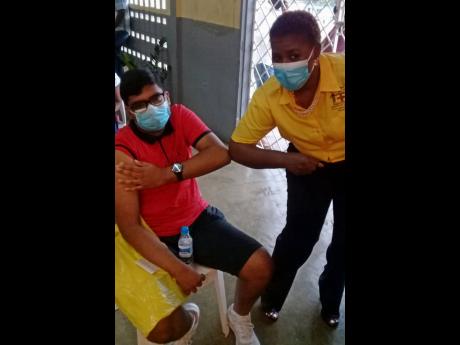 Contributed
Vedang Kevlani of York Castle High was the first student to be vaccinated at the vaccination blitz at Marcus Garvey Technical. Pictured with Kevlani is Karlene Segre, regional director, Ministry of Education, Region Three. 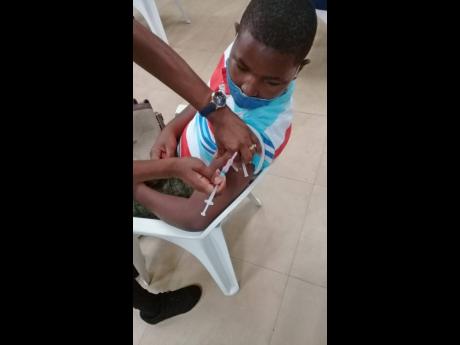 Contributed
Obryan Peters, 12, of Priory Primary and Infant School, getting his vaccine. 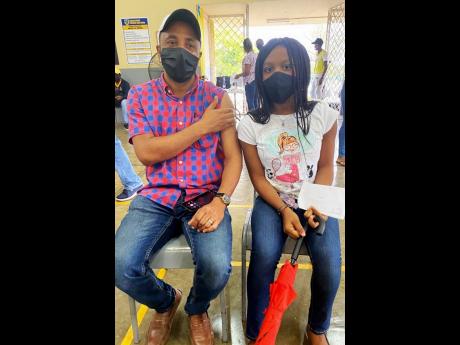 Reiterating that the coronavirus is no joke, as the ‘dead bus’ comes to the St Ann’s Bay Regional Hospital everyday to pick up bodies, a healthcare worker is urging parents to get their children vaccinated to facilitate face-to-face learning.

Delesha Walker took her son, 12-year-old Omar Hanson, who starts classes at the new Discovery Bay High School in September, to the vaccination blitz at Marcus Garvey Technical High School on Saturday to get his first shot, pointing out that she is concerned about the Delta variant and the way it is rapidly spreading.

She is already vaccinated, she said.

“Yes, I am concerned,” she said when asked. “Today I bring my son, I rather protect him than this thing get out, then I say ‘if I did know’.”

“To other parents who are feeling discouraged and say they are not doing it, I say this is not a joke because we have deaths every day. We have the dead bus come there (St Ann’s Bay Regional Hospital) everyday. People are dying and it’s better to vaccinate the kids and prevent them from dying, prevent a funeral. Even if they catch it, you just give them some Cetamol and they’ll be OK, than you have them on ventilator. To me it’s best (to take the vaccine) so that’s why I’m here.”

Hanson was one of around 300 persons who got vaccinated at Marcus Garvey Technical High School, with hundreds more at two other St Ann locations: York Castle High School in Brown’s Town and Moneague College in Moneague.

Another parent, Michelle Wynter, made sure to take her son, third-form York Castle student Ajani Harris to get him vaccinated, as she feared the Delta variant and the recent spike in cases. For herself, she said she wanted to get vaccinated before but was waiting for the Pfizer vaccine and now that it’s here, she’s also encouraging others to take it.

Meanwhile, Trevor Cole, principal of St Ann’s Bay Primary School, ensured he got his Pfizer shot at Marcus Garvey Technical High School on Saturday, and that his daughter, Daija Cole of Westwood High, also got vaccinated.

“I see the need to do it based on all that is happening and so I took that personal decision,” Cole said.

“I would encourage others to do their own research as well and to think about what is best for themselves, their family and the country,” he added.

Principal Anniona Jones said a lot of her students at Marcus Garvey turned out for the blitz, so too students from elsewhere.

“We were particularly pleased with the turnout and the constant stream of parents who braved really terrible rains this morning to ensure that their children are vaccinated,” Jones said to The Gleaner.

“We have seen parents from across the parishes, from as far as Kingston, Westmoreland, St James and Clarendon. We’ve had guardians, aunts, uncles, stepfathers, grandparents, taking children to ensure that they are vaccinated so they can access face-to-face schooling as one of the learning modalities,” Jones added.

She said Marcus Garvey is prepared for the new school year, whether by face-to-face or online teaching.

Johnson-Henry said despite the rainy conditions, an estimated 300 persons were vaccinated up to mid-afternoon, as the process went smoothly.

“We had persons out from as early as 8 o’çlock. The actual vaccination started at about 9:15 a.m.,”she pointed out.

And after visiting all three sites in St Ann, Segre told The Gleaner that things were looking positive.

“Things are favourable in St Ann, in terms of the numbers,” she said. “The turnout is encouraging at the three locations, in terms of parents, students and school employees.”

“The vaccine operates like a seat belt in a car; if you’re in a car and you crash, the seat belt prevents you from flying through the windscreen; likewise with the vaccine, it doesn’t prevent you from catching COVID, but it limits your chances of becoming critically ill,” Segre said.