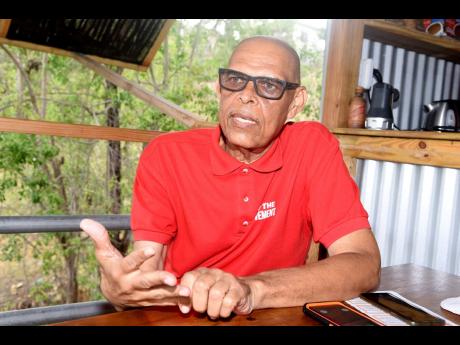 The opposition People’s National Party (PNP) was thrown into mourning yesterday when news broke that businessman Ewan Stephenson, who represented the party in the September 3, 2020 general election in St Elizabeth South West, succumbed to his long battle with cancer.

Opposition leader Mark Golding, one of several high-profile PNP personalities who responded to news of the death of Stephenson on social media, wrote, “RIP Comrade Ewan Stephenson – a man who has served the people. We are forever grateful for your service. Rest in Power,” on his Facebook page.

According to reports, Stephenson went public last year during by revealing that he was battling stomach cancer and was recovering from a surgery he had done.

Recounting Stephenson’s bravery during his 2020 election campaign, Lisa Hanna, another senior figure in the PNP, spoke to his quiet strength and his humility.

“ He fought a brave election in 2020 as our candidate in SW St Elizabeth, even when he had his personal struggles with illness,” wrote Hanna in a social media post. “... you were a gentle giant with such quiet strength and humility ... my sincerest condolences to your family at this time of great sadness. RIP.”

Stephenson, a former banker, first came into the national spotlight in 2017 when he was recruited by the PNP to replace Hugh Buchanan, who lost the St Elizabeth South West seat to newcomer Floyd Green in 2016 and walked away from representational politics.

Green, who blunted Stephenson’s challenge to keep the seat he wrestled from Buchanan, crossed the political divide as he was among those who took to social media to hail Stephenson’s contribution and to express condolences to his family.

“Regardless of our political views, Ewan and I have always shared a good relationship and I have always found him to be cordial, engaging, and passionate about service,” wrote Green. “Through his many business ventures and also his work in the financial sector, he has made a significant mark on the constituency.”

President of the St Elizabeth Chamber of Commerce Howard Hendricks, a childhood friend of Stephenson, remember him from his days at St Elizabeth Technical High School (STETHS), where he played cricket. In fact, it was Hendricks’ mother, a teacher at STETHS, who encouraged Stephenson to attend Bethlehem Teacher College when she transferred there.

“We used to be in the Saw Crew as youngsters. We used to party together ... we grew up together. Our families were quite close,” recalled Hendricks, who referred to Stephenson by his childhood name, ‘Bigger Blood’.

“I watched him complete college, then he went into banking. He was a part of a group that owned and operated a hotel, and I think he spent a little time in the family’s hardware business before he got into politics,” continued Hendricks. “He was a gentle giant, a really decent human being who accomplished much.”

Stephenson, who was said to be a devoted family man, is survived by his wife Hope, sons Brandon and Mark, and wider family circle and friends.