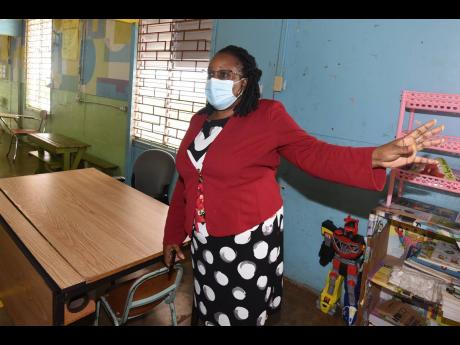 Kenyon Hemans/Photographer
Principal of Marlie Hill Primary Karlene Hall speaking about the changes she had to make at her Manchester-based school in preparation for face-to-face classes. 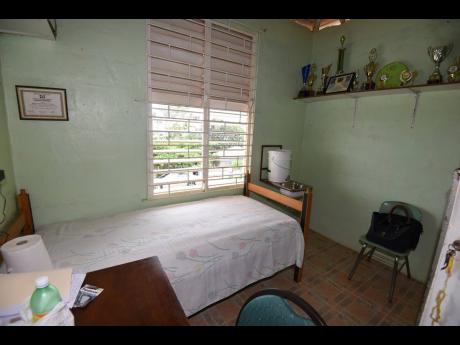 Kenyon Hemans/Photographer
The principal’s office at Marlie Hill Primary School in Manchester has been converted into an isolation room for students who present with flu-symptoms when face-to-face classes resume. 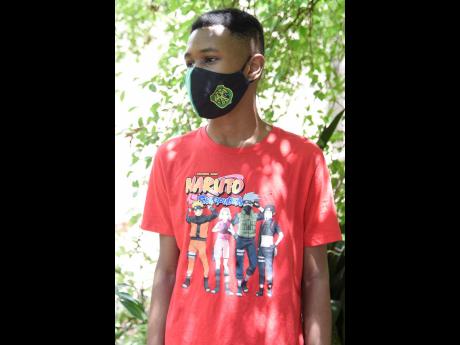 It’s a story of hate – across all sectors, continents, and among all populations. Not even those shouting loudest opposing vaccination against the deadly unseen monster like it. It’s the unwelcome visitor that people wish would go away and never return.

Some have battled it and live to tell the tale, but more than a million around the world, and over 1,600 Jamaicans, have been taken in its deadly wake.

“Jesus Christ, I hate #$*# COVID! It is ruining my life! It’s ruining all our lives, man! And this thing naah guh nuh wey!” a doctor in private practice declared on the phone at a St Andrew medical complex on Tuesday.

School principals and administrators hate it, too.

“We were hoping that it would be under control so we could return to face-to-face classes this year. But here we are. I hate it. I hate what it has done to the education and health systems,” stated Karlene Hall, principal at Marlie Hill Primary School in South Manchester.

Like Hall, Ian Crawford, principal at the nearby New Broughton Primary School, was hoping for a return to face-to-face learning.

“Man, this thing has the entire world confused. And with all that is happening, the children are suffering. I don’t know how the system is ever going to recover from this learning loss,” he told The Gleaner.

Students hate it just as much.

“Oh my God, my son hates it. He cannot stand it. It is too much for him, and for everybody now, man,” the elder Stewart said last week.

“COVID has confined him to a space, and you can just see the frustration on his face. He wants to be outside with his peers. From he went to Mona High for orientation last year he has not been back,” Stewart said of his son Nashane.

Amanda Gause is one of more than 100 second-year University of the West Indies (UWI) Mona campus students reading for the Bachelor of Law Degree (LLB).

“Yes, I heard that the Mu variant is here, and it does not look good for us,” she said Thursday evening, minutes after Health Minister Dr Christopher Tufton announced that another strain of COVID-19 had been detected on Jamaican shores.

“I left Excelsior (High School) last July, and although COVID was already here, I did not believe I would be starting second year in university and still be online. I was looking forward to first-year experience on campus. Corona changed all the plans I had for first year and sent me online,” she said.

Gause’s occasional visits to campus have been for paying fees and sitting examinations as there was no access to the library, which was closed.

The law faculty made e-copies of main texts available, however.

“I would love to be on campus. It’s much better than online. There are a lot of distractions for online. You have your television and your phone and I would not have to be worrying about Internet connection,” she expressed.

UWI now requires that all students seeking campus housing must be vaccinated; however, Gause is not seeking accommodation as she lives nearby.

“I hope I will experience campus, but because the variants come out so often, it’s really hard to say when. I would hate to think that I finish my degree at home. That would be so sad,” she bemoaned.

She is hopeful that the faculty will soon consider face-to-face tutoring because “the body language will aid understanding”.

Mikhi Stewart is a grade eight student at Calabar High School in St Andrew. Except for going with his parents to collect his new school package last year, he has never seen his classroom, met the friends he has in a private social media group, his subject teachers, nor heard the roar of the boys who call themselves ‘lions’ at devotions following an inspiring address.

However, “I don’t really miss face-to-face that much. I mean, I don’t like COVID, but I love online school,” said the now 13-year-old second-former.

His last day of physically being at preparatory school was fun and he wishes high school would bring some, too.

“We celebrated our PEP (Primary Exit Profile) results, and after that, there was graduation. And then, and then, that was it. That was the last time we were together as a group in person,” said Stewart, who will take the second dose of his COVID-19 vaccination shortly.

“I don’t really like to socialise, so I am not missing anyone, but it would be nice to meet them, though,” he told The Gleaner.

For him, the pandemic is convenient for him and his parents.

He is usually worried about the dangers on the roads, “especially because of the unruly taxi drivers” when his parents take him and his brother to school. But now he cannot be late for online school as he will be ready even if he wakes late.

Principal Karlene Hall said COVID-19 has been devastating on her students, a sentiment shared across the education sector. More than 150,000 primary students have been deemed lost from school because of the lack of physical learning, and there is a desperate push for re-engagement by the Government.

“We were able to cater to about 65 per cent of our small population of 56 students online. Connectivity issues, lack of parental supervision using the platform, as well as just plain inability to focus using the online mode by some students are some of our issues,” she said of the school in deep rural Manchester.

A week before the beginning of the 2021-2022 academic year, Hall was preparing school for another year of online.

Her office is the isolation room for any student who has to be on the compound and showing signs of the virus.

The students come from communities where several persons have died as a result of COVID-19 because of their comorbidities. Some of the victims are relatives of the children.

“It is so sad. The vaccine hesitancy is even sadder. And the children will continue to suffer as long as it is not under control,” she said.

Outside the school and perched on a willow tree is her sanitising station – liquid soap along with water dispensed from a five-gallon plastic container.

Another sanitisation station is outside of the entry to the grade three classroom. Children in the infant division enter from one section of the school and other grades from their classroom doors.

“I am trying my best to keep some distance between them,” she said.

With the Mu variant now confirmed in Jamaica, coupled with the highly contagious Delta variant, full face-to-face school may well be a long distance away.

And when that time comes, one adjustment that will be made at the Marlie Hill Primary School is the end of seating three children to one wooden desk. The school has few resources, but Hall said it was a given that only one child will be seated per desk.

There are some of those three-to-one desks at New Broughton, too, said principal Crawford, but they will now seat only one. None of his students received tablets under the Government’s programme, only the teachers.

“The power outages affect us greatly with connectivity. Between electricity loss, connectivity issues, and COVID loss, the devastation is just troubling,” he told The Gleaner.

Connectivity challenges have long been cited as a big problem faced by rural secondary schools even before COVID-19 hit last year March.

Crawford is hoping that life will soon return to some form of normalcy.

“The children have to return to school soon. And even though school has been online, I was so pleased with their performance. Despite the tragedy of the virus, they did so well. The teachers rallied with them and went above and beyond. They all did well. But online school is not good for the long term,” he said.

For now, COVID-19 appears to be saving the Government some money on repair and replacement of school furniture.

March 2020 was the last time the education sector had full face-to-face classes.