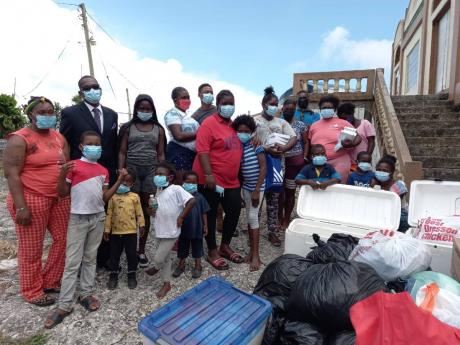 Tamara Bailey
The victims of the fire, along with Pastor Donald Valentine (second right) and members of the Coleyville Seventh-day Adventist Church, where the family is being housed temporarily. DOUBLE-CHECK PASTOR'S POSITION IN PIC 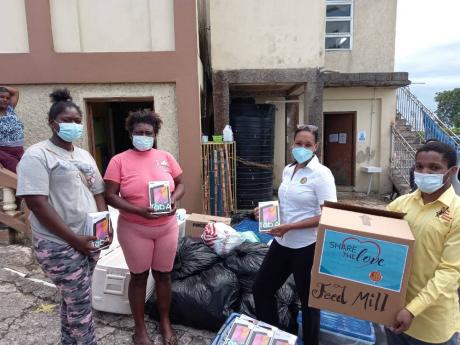 Contributed
From left: Fire victims Zanaih Robinson and her mother, Donna Whyte, receive donations on behalf of their family from Group Public Reltaions Officer Danah Cameron and her colleague.
1
2

Following The Gleaner’s story, published last Tuesday, of a fire that left 18 persons homeless in the community of Coleyville in the parish ,the Jamaica Broilers Group was alerted and has since made a substantial donation of food, clothing and tablets to the victims.

According to Group Public Relations Manager at Jamaica Broilers, Danah Cameron, the donations, which were made last Friday to the victims , who are now being temporarily housed at the Coleyville Seventh-day Adventist Church, were made possible through the personal and collective efforts of the employees.

“We came across the article in The Gleaner and we were hard-pressed to see how this fire impacted a family of 18. We even learnt that there were additional children who weren’t in the first count, so all of 23 persons, 13 of whom are children, were impacted.”

“When we reached out to our staff and told them that we are putting together this initiative, they responded tremendously. The clothing were all donated from staff and their family members, and a few of them brought in food. We had a member of staff donate the containers so that the family could store the items while being temporarily housed at the church,” said Cameron.

Additionally, she said the company provided two cases of whole bird chicken, stew (pre-cut packages) and frankfurters, and Hi-Pro donated seeds and ‘Grow Strong’ kit, which includes herbicides and fungicides, so the family can resume their farming.

She said with the knowledge of the family’s inability to stay safe, earn a living and have the children be properly schooled, the matter was treated as urgent.

Acknowledging the consistent needs these victims will have until some normality is returned to their lives, Cameron is encouraging those who are in a position to help to give to the cause.

“What’s really on our hearts is the children and getting them back to school. We have really just touched the tip of the iceberg in terms of what these children need to get back on track and to be stable. Food is going to be consumed, so keep on giving, reach out. This is the sacrifice that the Lord expects of us, to take care of one another.”

Zanaih Robinson, who spoke on behalf of her family, told The Gleaner that the donation came at a time when they were becoming extremely depressed and hope for them was slowly fading

“We are so grateful. This is a big, big help. It makes us feel so happy; less depressed, less stressed. It was so difficult before we lost out homes, because sometimes we go Coronation Market and things nah sell and then the fire; so it really made us depressed,” she lamented.

Though she cannot find enough words to thank all the persons who have so far helped her family, Robinson said her hope is to be able to have a place they can call home again.

“We are happy that the church has allowed us to stay here. They have been so good to us, and we don’t know what we would do without them; but this is just temporarily, and we will one day have to find a home. Our hope is that we can get back a house, especially for the kids, because you know kids are the future and you have to protect them. If anybody can donate anything to the building of our home, we would be really appreciative,” Robinson noted.