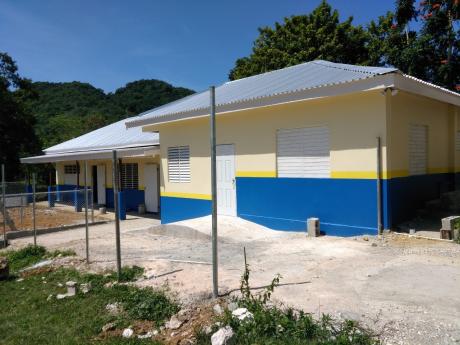 The Pondside Primary and Infant School in Hanover, which has been renovated through approximately $25 million in financing from the Culture, Health, Arts, Sports and Education (CHASE) Fund – Contributed photo.

Students and staff at Pondside Primary and Infant School in Hanover will enjoy more modern and spacious surroundings when face-to-face classes resume, following the completion of infrastructure upgrading of the infant department at a cost of $25,410,000.

The construction project, undertaken through financing from the Culture, Health, Arts, Sports and Education (CHASE) Fund, included refurbishing and expansion works to address the lack of adequate classroom space.

Two fully furnished classrooms and bathrooms were built, in addition to a play area equipped with a playset, perimeter fencing, among other structural improvements.

“We now have spacious, well-ventilated classrooms, which are conducive to learning,” she said.

She notes that before the start of the project in November 2020, the infant department had one classroom divided into two sections, a students' restroom and a small play area.

“We now have three spacious classrooms, an administrative area, students' and teachers' restrooms, including a shower area for the students, a sickbay and a play area.

“The school is now fully fenced and the CHASE Fund has improved our water supply through the contribution of a large tank and pump system. The electrical features were also upgraded offering better lighting and a fire alarm system was installed. We were provided with furniture – desks, chairs and tables for both teachers and students,” she shared.

McLeod-Henry, who has served as principal for 11 years, says that with the improvements, the school is looking to increase enrolment, as more parents have shown interest in registering their children.

She notes that due to the run-down condition of the previous infant department building, parents were reluctant to send their children to the school.

Pondside Primary and Infant School was rationalised by the Ministry of Education, in 2014.

The rationalisation process involves merging clusters of basic schools as well as subsuming some into infant departments of primary schools.

Most of the students enrolled in the school are from neighbouring communities such as Cascade, Woodville, Coolspring and Flint Wood.

For his part, chief executive officer of the CHASE Fund, Billy Heaven, says that CHASE's involvement in the development of the nation's early-childhood education sector is “deliberate”.

“We understand that the care and education received during this period will impact children's academic and social trajectories throughout their lives. Early-childhood education sets the stage for successful academic outcomes and contributes to long-term personal development,” he pointed out.