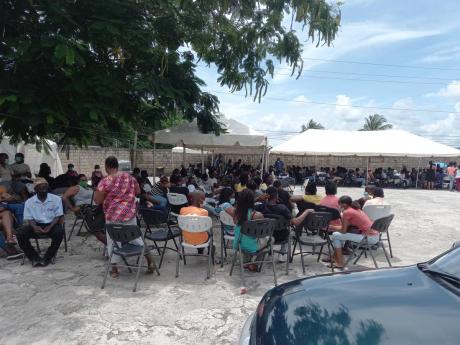 Scenes of crowd that turned out at the vaccination blitz at Bellefield High School on Tuesday. 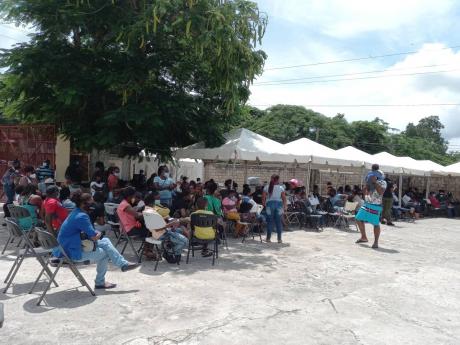 Tamara Bailey
A section of the crowd that turned out at the vaccination blitz at Bellefield High School on Tuesday.
1
2

Scores of persons, including children, turned up at the Bellefield vaccination site on Tuesday to receive the second dose of the vaccination, despite the difficulty in securing transportation on no-movement days.

Public health nurse in charge of the facility, Maxine Isaacs, said the registration numbers for the area continue to be high.

“At our last vaccination blitz we had 496 persons. Today we have a good turnout and its an indication, at least for Manchester, that the people have been very receptive of the vaccination. People turning out to get the vaccine can only help the country in reaching herd immunity,” she said.

But while several persons are still weighing their minds about whether vaccination is the best option for them, inoculated youngsters are maintaining that each individual must assess the facts and make the best decision for their health.

“I was worried about the long- and short-term effects of the vaccine. However, I took the first dose and I’m fine. I have nothing to say to the anti-vaxxers. Everyone has their own opinion, and not everybody will share my opinion. It’s their body, their choice ... their health is in their hands,” said fifth-form student Gabrielle Dixon.

Dixon’s mother, Shellyann Wiliams, said she and her children were vaccinated because she wanted to ensure they were safe and that she was playing her part in helping the country return to normality.

“I had made up my mind to take the vaccine before now, but then the Government announced that the vaccine is here for children, and I decided I won’t be vaccinated without my children. I want to make sure that me and my children are safe and I play my part in helping us return to normal. My children have been home for a year, they need to go back to face-to-face school.”

Having lost a close family friend to COVID-19 just last week, Williams said the deadly effects of virus is not to be taken lightly, and she encouraged all to make an informed decision for vaccination.

Many of the persons who turned up at the site admitted that they were once against the vaccine, but now recognise its importance in giving them a fighting chance.

“I am someone who go with my mind, and when I woke up this morning, my friend said she was taking her mother, and I just said I am going to come today to get my shot,” said Delroy Clarke.

Having lost his job as a musician who performed at a set location multiple times per week for the past six years, Clarke said he has not been able to return to his biggest income earner for the past year as a result of the pandemic-induced lockdown days and the downturn in the economy, compounded by a rise in positive COVID cases.

“I am also an artist. I do paintings, and I had to jump out and do that for the income I would have lost as a performer.”

Clarke said even though he delayed getting the jab, his aim is to now encourage his relatives, among others.

“My father doesn’t go out much, but when I go home I am going to show him that I have taken mine and I am fine, and he will have to take his once he is able to, healthwise.”

Much like Clarke, Aaron Campbell, who visited the Bellefield High School to get his shot on Tuesday, said the pandemic has caused him to change jobs, and though it worked out in his favour, he is hoping that some level of normality can be restored soon.

“I am in construction now and the pandemic doesn’t affect construction that much. But before, I was in taxi operation and I had to leave it before things got worse. I just took my vaccine today, but I would tell people to take it now. Don’t wait any longer, it’s safe, it’s OK. It’s the best thing to do. We want to get back to our normal lives and we are nowhere near normal right now. Things are not working out for several people, and the vaccine can help us,” Campbell said.