No movement, no work, no food 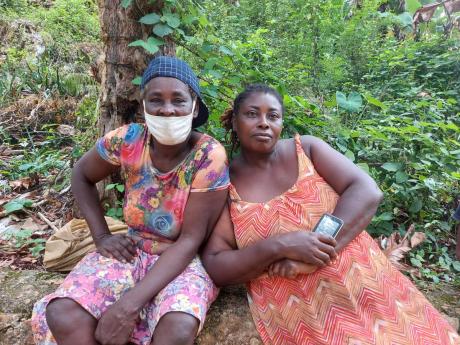 Photo by Tamara Bailey
Sixty-six-year-old Nora Henry (left) and her daughter Marsha Edwards, both domestic workers of Top Bellefield in Manchester, say it has been a rough road finding employment and providing for their families during the pandemic. 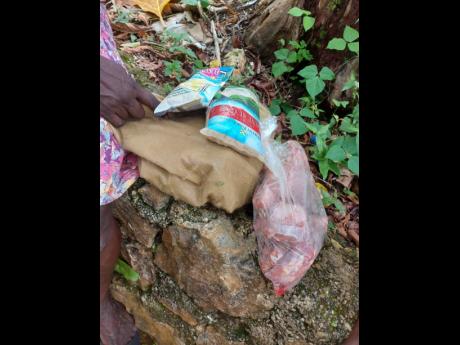 Photo by Tamara Bailey
Nora Henry displays the food items she was able to credit from a corner shop in Top Bellefield, Manchester, on Tuesday during the lockdown.
1
2

Sixty-six-year old Nora Henry sat on a wall below her home in Top Bellefield, Manchester, on Tuesday, weighing the risk as she contemplated making a dash to a nearby shop to get food during the lockdown without being spotted by patrolling cops.

Her need for sustenance trumped other concerns as she made a brisk walk to discreetly credit a bag of three items along with two pieces of ground provision, which she was gifted.

Almost out of breath, Henry told The Gleaner that since the COVID-19 pandemic hit Jamaica, she has been finding it hard to make ends meet, and her struggles grew more intense with the series of no-movement days announced by the Government to rein in infection numbers.

“Before the pandemic, we work we little money and people call we fi work, but since COVID, we only get calls now and then because some people don’t want you in them place,” she said, adding that other domestic workers were facing the same predicament.

“In lockdown, you can’t go anywhere, so that means no work and sometimes no food. Sometimes a tea me drink a go a mi bed. Mi just just go credit something down a the shop and it come to $920. Thursday when me work, me pay the shopkeeper,” she said.

Her daughter, Marsha Edwards, who later joined her, said that she is a domestic helper and often struggles to get payment from some of the persons who hire her.

“Sometimes dem say they don’t have the money. They say next week, and when you go next week, they still don’t have the money,” she explained. “Two weeks now, me and my mother wash some clothes for someone and they say we should come for the money Thursday. It’s rough, very rough, and with the children home, you have to find food every day and cook every minute.”

Edwards said that they sometimes do a bit of farming to earn some cash.

“We plant a little cash crop and beg someone to sell it for us. Otherwise, if we don’t work and people don’t stretch a little thing to us, we don’t have nothing. Some people will hide and talk, but me nah hide and talk. It rough,” she said, adding that her wish was for the Government to provide more jobs.

The mother of two said that her children’s schooling is being affected as they are unable to access classes, forced online, due to the pandemic.

“We not even have a touch screen (Smartphone). If we did have that, the children could get the [class]work. If me get a tablet right now fi me bwoy, me just go down to him school and get the things on it,” said Edwards.

“Things did better before the pandemic, and the thing I fear most is that the people won’t stop the crowd, the party. Dem nah sanitise often, and the taxi man a pack up the car too much,” she told The Gleaner, concerned that enough is not being done by the public to limit transmission of the coronavirus.

She has resorted to treating her asthmatic son with home remedies out of fear that he could contract the virus if taken to the overwhelmed Mandeville Regional Hospital.

The pressures being experienced by Henry and Edwards are also affecting a number of other families across the parish.

Inspector of Poor Densil Mundy said that 628 persons were registered at the Poor Relief Department of the Manchester Municipal Corporation as at June 2021, adding that the figure would be updated at its next meeting this month.

“Persons on poor relief are normally paid a set amount of money every month, and during that period, if we do get supplies from the Food For The Poor, we normally assist these persons,” he told The Gleaner.

The department also caters to 146 homeless persons in the parish and is assisted through the Candle in the Dark shelter, Friends in Need Charity, and the Ministry of Local Government, who supply them with meals.

While many Jamaicans opt to sign up with the Programme of Advancement Through Health and Education (PATH) – a conditional cash-transfer programme funded by the Government that aims to satisfy the needs of the most vulnerable – Mundy said that people cannot sign up for both PATH and poor relief assistance.