Poll: Why most unvaccinated Jamaicans will not take the jab 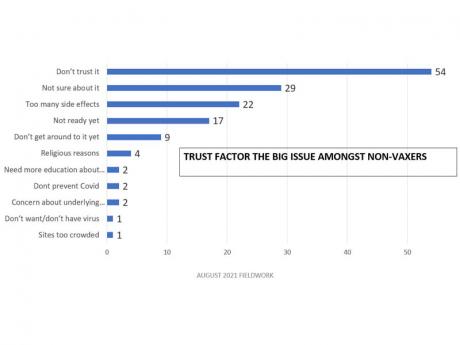 The poll was conducted between August 19 and September 3 among 1,003 respondents.

An RJRGLEANER Don Anderson poll has found that Jamaicans have mixed views on taking the COVID-19 vaccine.

Two out of every 10 respondents have taken the vaccine, with 25 percent indicating that they will.

Another 25 per cent reported that they will not be taking the jab.

Some 20 per cent of Jamaicans said they were not sure yet, while nine percent have not been vaccinated.

The poll was conducted between August 19 and September 3 among 1,003 respondents.

Among those who have not yet taken the vaccine and those opposed to taking it, trust was the major factor.

More than half of the respondents or 54 percent said they do not trust the vaccine.

Meanwhile, another 29 per cent of poll respondents said they were not sure about it, while 22 percent reasoned that there are too many side effects.

Seventeen percent of the participants reported that they were not yet ready to be vaccinated and just under ten percent said they had not got around to it.

Only four percent of respondents cited religious reasons for not taking the jab.

The remaining eight percent of respondents reported that they needed to be more educated about the vaccine, had concerns about underlying illnesses, were turned off by crowded vaccines sites, did not see the vaccine as able to prevent COVID-19 or simply did not want to take the jab.

Jamaica is targeting the vaccination of 65 percent of the population by March 2022.

According to the health ministry's vaccine tracker, as at 4:00 p.m. Thursday, some 693,827 doses had been administered.

Another 17,752 were single doses of the Johnson & Johnson COVID-19 vaccine.