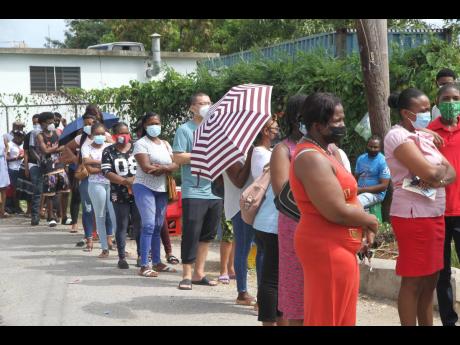 Nathaniel Stewart
Lines extends through the gates of Denbigh Primary School on Sunday as persons wait to take the COVID-19 vaccines.

Confusion marred several COVID-19 vaccination sites across Jamaica on Tuesday as hundreds of Jamaicans who turned out to get the jab amid a coronavirus surge were left frustrated and angry, citing a disorganised blitz.

Persons who attended different sites complained bitterly about long waits, poor planning, a lack of guidelines from marshals and the absence of special queues for the elderly and the disabled.

At Merl Grove High School site in Kingston, persons lamented a shortage of vaccines at the site, which resulted in some hopefuls being turned away.

Jamaica is experiencing a third wave of the virus which saw August recording approximately 400 COVID-19 deaths with dozens more under investigation, and new infections.

Soaring infections and fatalities have coincided with an apparent decline in vaccine hesitancy.

But site organisers seemed to have been ill-prepared for Tuesday’s large turnouts.

A woman who gave her name only as Vivienne, who left her home in Clarendon at 4:30 a.m. for the vaccination site in Kellits, berated organisers for their perceived lack of proper planning.

She said although a large crowd had gathered at the site from early, the police arrived there about 10:30 to open the gate.

But prior to their arrival, the crowds got boisterous.

“The people get boisterous and they tried to force the gate open and then the people who were on the outside – ­­because I was on the outside all this time – were really upset because they had come from 4:30 and not getting through and I left them there at 12:20 p.m. not getting through,” she told ‘Beyond the Headlines’ host Dionne Jackson Miller.

At Turtle River Park in Ocho Rios, St Ann, a woman who identified herself as Victoria said it was a similar case of disorder because the ticketing system was abandoned.

She said although persons had arrived from as early as 4 a.m. and had collected numbers, the guards directed the first 100 visitors to enter when they opened the gates at 8:30.

“People ran in, people without number, people with numbers. Everybody moving towards the gate, people were there likely to catch COVID more than anything else, bundling and pushing on each other,” she said.

And in Kingston at Merl Grove High School, a woman who requested anonymity told The Gleaner that there were overlong delays for persons awaiting their second dose.

However, she said the authorities seemed to have rectified the problems as she was later able to get the vaccine.