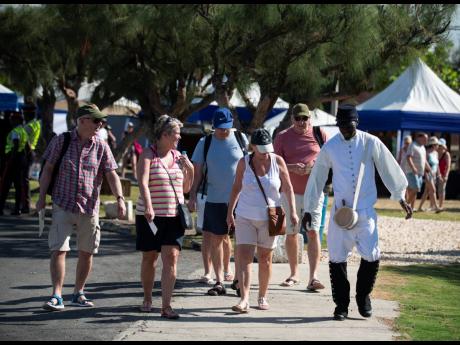 File
Scores of tourists explore Port Royal after disembarking the Marella Discovery 2 on Monday, February 24, 2020, on the vessel’s second visit to the recently developed pier in Kingston.

Tourism stakeholders across Jamaica have welcomed the move made by the British government to simplify its rules for persons travelling to and from the United Kingdom (UK).

British Transport Secretary Grant Shapps announced on Friday that the UK is scrapping its ‘traffic light’ system that ranks countries as red, amber, or green – high, medium, or low risk from the coronavirus. The categories have been criticised as unfair, and sudden changes to countries’ status have caused headaches for thousands of travellers.

Shapps said the “simpler, more straightforward system” would allow “more people to travel, see loved ones or conduct business around the world while providing a boost for the travel industry”.

He said the changes were possible because of Britain’s high vaccination rate. Almost 82 per cent of people 16 and up in the UK are fully vaccinated.

The UK government said changes stemmed from heeding complaints from travellers and businesses that its regulations aimed at staving off the spread of COVID-19 were cumbersome and ineffective.

Robin Russell, general manager of Deja Resort, in Montego Bay, St James, told The Gleaner that this was a most welcome move as Jamaica had been listed by the UK as a level-four high-risk country due to its elevated COVID-19 infection rate.

“As you know, England is the third largest source market where tourism is concerned to Jamaica, and any news that allows the tourism market to flow freely is welcome news,” Russell said.

“This move also shows confidence in the resilience tourism corridor, and I for one believe the decision taken by the British government will actually prove very effective within the tourism industry.”

A LESSON TO LEARN

Another major player in the tourism industry, Richard Wallace, general manager of the Boardwalk Village Resort in Negril, said the new measure is excellent news for tourism in Jamaica as the country depends heavily on the UK, which ranks high, along with the United States and Canada, as a source market for tourists.

“We were missing the British travellers during this period, and quite frankly, a large amount of stakeholders in Negril depend mainly on UK travellers, so this is more than welcome news within the sector,” he said.

Wallace, who also serves as president of the Negril Chamber of Commerce, said Jamaica should learn from the United Kingdom, which he said is able to relax its travel restrictions because a large percentage of its population has been vaccinated against the coronavirus.

“This means that we must now continue to be vigilant in our fight against COVID-19 and make all efforts to take our own vaccine population up to 84 per cent, and more,” Wallace stated.

Wallace pointed out that if Jamaica wants to reach that high rate, we must comply with the COVID-19 protocols, particularly tourism workers, who especially need to be fully vaccinated as they will now be working among British tourists who are fully vaccinated but can still be carriers of COVID-19.

The Gleaner also caught up with Delano Seiveright, senior adviser and strategist in the Ministry of Tourism, who shared that the intent of the traffic light system no doubt meant well, but that there was just too much confusion and complexity.

“The simplification of the traffic light system is good for us in Jamaica. The UK is our third largest market for tourists, and Tourism Minister Ed Bartlett and the [Jamaica] Tourist Board have been very aggressive in recent months in cornering the UK market because the COVID situation there had improved and their vaccination rates are among the highest in the world,” Seiveright stated.

“We also had positive news from British Airways, Virgin Atlantic, and Major Chartered Carrier TUI as it relates to international flights and new flights to Jamaica, of course, because this was affected. But beyond that, we are thankful for the great news, which is a boost for travellers’ confidence, and we are sure that in coming weeks, Jamaica stands to benefit.”

In announcing the scrapping of the “traffic light” system, the UK said that as of October 4, the country would implement a two-tier system with several dozen countries where COVID-19 is widespread classed as “red”, and the remainder classified as “open”, with eight countries scheduled to be removed from the “red” list by Wednesday.

Up to Friday, Jamaica was still grappling with its third wave of the virus, with 601 persons testing positive for COVID-19 on Thursday, bringing the total infections since March 2020 to 25,793, with the country’s positivity rate at 37.5 per cent.