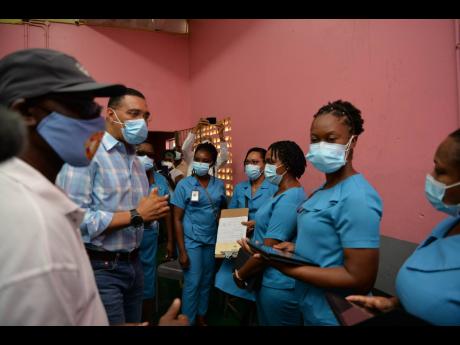 Contributed
Prime Minister Andrew Holness (second left), gives words of gratitude and encouragement to healthcare workers at the vaccine site at Cross Keys High School during his tour of blitz sites in Manchester on September 16. 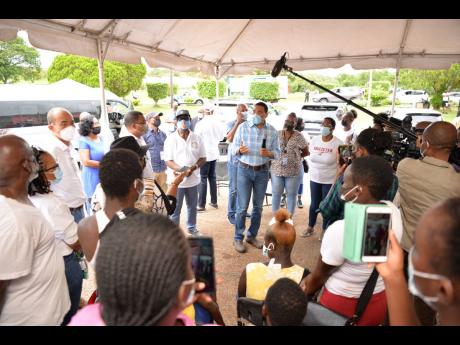 Contributed
Prime Minister Andrew Holness (centre), addresses residents gathered at the Cross Keys High School to receive their COVID-19 vaccine during his tour of blitz sites in Manchester on September 16. He was accompanied by Local Government and Rural Development Minister Desmond McKenzie (left).
1
2

Prime Minister Andrew Holness is appealing to Jamaicans who have already taken the COVID-19 vaccine to become ambassadors in the fight against the virus by encouraging others to also take the jab.

“You are the ones who have decided to overcome your own personal fears, scepticism, rumours, untruths and conspiracy theories, as well as people telling you not to take it. You are the heroes in the fight against COVID-19. You have decided to take the vaccines and I thank you.

“I am asking you to be ambassadors now that you have gone through the process. Go back to your households and communities and confront those who are afraid and unsure and encourage them to take the vaccine,” Holness added.

The prime minister was speaking to persons gathered at the Cross Keys High School in Manchester on Thursday, during a tour of vaccination blitz sites in the parish.

Holness’ visit to Manchester was part of his islandwide vaccine mobilisation and public education campaign, aimed at making a personal appeal to citizens to get vaccinated as the country battles the third wave of COVID-19.

He noted that many people are now having a closer experience with the fatal aspects of the virus and are starting to realise that it is very serious.

He told the residents of receiving news about the loss of an unvaccinated constituent to the disease on his way to Cross Keys and cautioned them against “waiting until things got close” before they get the vaccine.

THE ONLY WAY OUT

He urged them to use their good judgement and reasoning to see that some countries are now returning to normal because most of their populations have been vaccinated.

“When you go back home, confront the people who are hesitant and spreading rumours and sending scam WhatsApp and emails, and tell them that the only way out of the pandemic is to take the vaccine,” Holness stressed.

During his visit to the Cross Keys location, the prime minister spoke with the medical team, giving them words of encouragement to continue their fight against the pandemic.

Flora Dixon, a resident of the neighbouring community of Pusey Hill, said she took the single-dose Johnson & Johnson vaccine because she thought it was necessary to prevent her from getting the virus. Her school-age daughter has also been vaccinated.

At Manchester High School, member of parliament for Manchester Central, Rhoda Crawford, said that things were going well, noting that more than 3,000 people had been vaccinated over a four-day period.

“We have been vaccinating 500 to 800 people daily and I want to encourage all of the people in Manchester to come out and take the vaccine. I know that quite a number of people are expressing interest in [particular vaccines], but I want to assure you that the best vaccine is the first vaccine,” Crawford said.

At the Holmwood Technical High School, the prime minister thanked the medical team led by Dr Shonette Blair-Walters, and member of parliament for North Eastern Manchester, Audley Shaw, for their continued efforts to get residents vaccinated.

Over at the Greenvale Community Centre, member of parliament for North West Manchester, Mikael Phillips, informed that the vaccination exercise in the community of Evergreen last week had seen more than 80 people being vaccinated.

Meanwhile, Manchester parish manager for the Social Development Commission, Beverly Boothe said all her eligible family members in Jamaica and overseas have been vaccinated.

“I am over 60, diabetic and hypertensive and my doctor told me before the vaccines came, ‘don’t let me have to tell you to get the vaccine’,” she said.