We will not bow to vaccine pressure – Linstead taxi operators 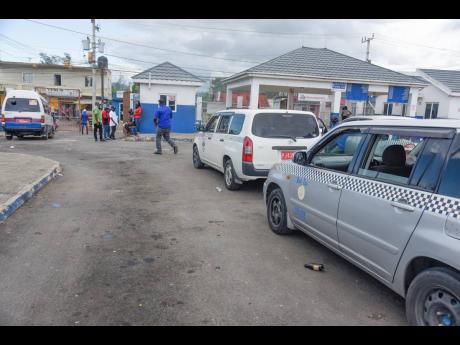 Nicholas Nunes/Photographer
Taxi operators in Linstead are adamant that they will not be taking any of the COVID-19 vaccines.

The launch of an initiative by the Transport Operators Development Sustainable Services (TODSS) to promote the vaccination of operators of public transportation has been met with sharp resistance by the majority of taxi operators in Linstead.

TODSS, with support from the British Caribbean Insurance Company, launched the initiative last Wednesday to begin on September 22.

But while TODSS President Egeton Newman sees the move as a major vaccination and education campaign aimed at having at least 65 per cent of the sector vaccinated, the taxi men are saying they fear the move is designed to force their hands.

“If I am forced into taking the vaccine, I am prepared to remove the red plate from my vehicle and find other means of survival. The day they force me to take it, will be the day mi hang up mi keys,” said Kirk, a taxi operator who plies the Linstead to Moneague route.

“I have not seen a taxi man caught the virus since it came to Jamaica, so we are not the problem,” Kirk continued.

Anthony, who operates his taxi from the Linstead Transportation Centre to Spanish Town, has been in the public transportation business for more than 20 years. He described the launch of the vaccination initiative as a move by TODSS to put a big stone in their path.

“Jamaican people nuh like nothing force on them. Dem can’t come force vaccination on us like that. They have to come with education and information before vaccine roll out,” he said, adding that the majority of the operators at the Linstead car park have vowed to resist any attempt to force vaccine on them.

ADHERE TO PROTOCOLS INSTEAD

Roderick, who has been providing taxi service for five years, was also adamant about not taking the vaccine. He said there are many factors why he is against it.

“Don’t care what they say, I personally know a friend who take it and now he is unable to get an erection, and another person who die after getting the vaccine,” Roderick alleged.

He insisted that all the taxi men at the Linstead Transportation Centre adhere to the protocols, so there is no need for them to be vaccinated.

“All of us carry mask and sanitiser in our cars, and we carry the umber of people them say we fi carry,” he added, while asking the driver of a departing taxi to show the extra masks and sanitiser in his vehicle to prove his point.

According to him, passengers are required to wear masks to ride in his taxi, and the same is true of the other operators.

Meanwhile, Newman, recognising the hesitancy among public transportation operators, sought to clear the air by declaring that the organisation has no interest in promoting mandatory vaccination.

“We believe it is not right, and could cause some form of dislocation of the principles in Jamaica if we move forward with mandatory vaccination,” Newman noted.