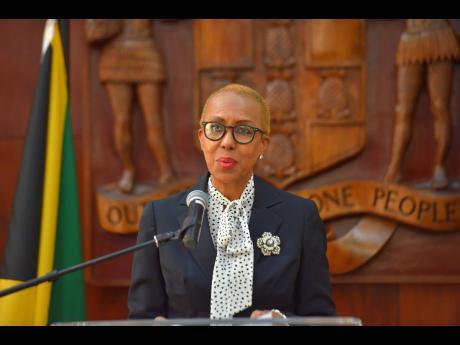 Information Minister Fayval Williams said today she had no update on the Government’s position on the issue - File photo.

The Holness administration is yet to articulate how it plans to deal with the multimillion-dollar investment scandal afflicting the Airports Authority of Jamaica (AAJ), three months after it emerged publicly.

Information Minister Fayval Williams said today she had no update on the Government's position.

“This is something that I could go back to the Ministry of Transport and Mining to find out what is the latest on this,” Williams said at a post-Cabinet press briefing.

Finance Minister Dr Nigel Clarke, on July 21, threw the spotlight on Montague in revealing that the AAJ and its subsidiary, NMIAL Airports Limited, broke the law in making the first of two investments in First Rock, a St Lucia-registered private-equity real estate firm.

He has made no further comment, while Montague, to whom the boards of the AAJ and NMIAL are answerable, has been silent.

However, more details emerged this month, including a revelation that the boards of the NMIAL and the AAJ went against a recommendation in approving the investments in the start-up company.

They were warned that First Rock had “limited financial and operational history” and only met one of six eligibility criteria.

The two boards also sidelined representatives of Montague's ministry from the decision over the first investment in February 2019 at a retreat attended by the officials.

A second stock purchase was made in January 2020.

The current boards of the AAJ and the NMIAL include people who served on the boards that made the controversial decisions.

The Opposition People's National Party has called for the sacking of the boards and an Integrity Commission probe.

Efforts are under way to sell the 28.5 million shares bought at US$0.10 per unit.

The stock traded on Tuesday at US$0.07 per unit.