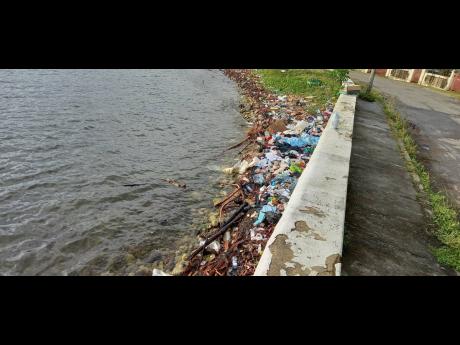 Gareth Davis
A section of the mini park in Portland shows a pile-up of garbage along the shoreline.

A MINI park, which was built to accommodate persons seeking an evening of relaxation and comfort while engaging in social gathering in Port Antonio, Portland, has been transformed into a dumping site.

The once beautiful and picturesque park with its glittering flowers and the nearby sea floating in the background is now a painful site to look at, as the once glamorous outlook has been transformed into a breeding ground for roaches, rats, and other rodents – clearly defeating its intended purpose.

Mayor of Port Antonio Paul Thompson is among one of the many voices now lashing out at the illicit practice by persons who continue to dump garbage in the park, which is located on Foreshore Road in the vicinity of the Portland Municipal Corporation building.

Thompson, who spoke with The Gleaner on Monday, pointed out that the effort by Member of Parliament (MP) Ann-Marie Vaz to transform that area into a mini park where persons could sit, eat a meal, enjoy some ice cream, and engage in discussions was a marvellous, well-intended and well-needed project.

He noted that since the park was built in 2019, it was heavily utilised by many and that it was the talk of the town, as people from all over came just to enjoy the beauty and natural look of the park, which is located close to the shoreline.

“I just cannot understand why people would dump garbage in the park and along the seashore, when there is a garbage bin right there for them to dispose of their waste,” Thompson argued.

“I distinctly remember when the MP approached us and told us about her intentions to build a mini park, so that persons wanting to rest or relax during the afternoon and into the night could do so in peace and comfort at a spot that is breathtaking. The Royal Mall is right next to the park, so what usually happened is that persons who bought meals or ice cream had to sit on a nearby wall or go to other locations to enjoy their meal.

“So, therefore, just the thought of building a park right next to the Royal Mall was a master stroke on the part of the MP. But as we can see, there is a huge garbage pile-up comprising plastic bottles, Styrofoam boxes, plastic bags, sanitary items, old shoes, and clothing. This is unacceptable and clearly, this is now defeating the effort of stakeholders, who combined recently to rid the town of rats, which were proving to be a nuisance,” Thompson added.

Another resident, businessman Wayne Arlington of Spotless Cleaning Enterprise, said that such behaviour on the part of some persons is unacceptable, as not only is the area near the park (along the shoreline) being used as dumping ground, but that evidence of garbage is now surfacing in the park itself, which could pose a serious challenge to either reduce or contain the rodent population going forward, especially in Port Antonio.