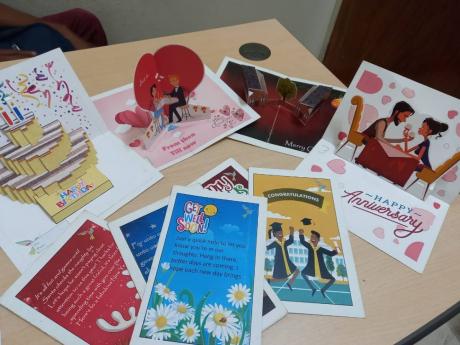 Photo by Tamara Bailey
Some of the pop-up cards made by self-taught graphic artist Dareego Gordon. 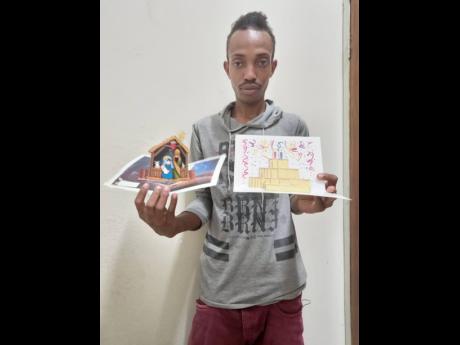 Photo by Tamara Bailey
Self-taught software developer and graphic artist Dareego Gordon displays some of his pop-up cards. He is seeking help to establish a business to be able to find a suitable home and sustain himself.
1
2

After losing his mother at age 12 then having his father, who he saw twice per year, die years later, Dareego Gordon and his older brother were eventually evicted from a house he and his older brother called home. Now, the self-taught software developer and graphic artist is hoping for a breakthrough.

The 30-year-old, who has been staying at the Candle in the Dark homeless shelter in Manchester for the past two years, did not fathom that he could have faced such obstacles on his journey, but he remains undaunted.

Gordon told The Gleaner that the death of his mother affected him more than he had initially realised, and even stunted his personal and professional growth.

“I was employed before, at a pharmacy, but I think I was getting slack on the job and that’s why they let me go ... ,” he admitted. “It was after experiencing all those things that I realised just how much my mother’s death affected me.”

As he began to navigate life with a clearer mindset, Gordon said he lost his home, but found a deeper hunger for success.

“After the house was demolished, my brother went overseas and I had nowhere to go but Candle in the Dark ... . From I was young, I always liked the computer, but it was just recently that I got a second-hand computer. It doesn’t work properly, but I managed to do some designs on it,” he said.

Fascinated with coding and creating apps, Gordon said that he soon learnt how to build websites by watching YouTube tutorials.

“ ... I watch tutorials for everything and learnt how to even design pop-up cards. I have never gone to school for this and I don’t have education pass the secondary level,” he said. “I just love this. I watch videos and work at it. I first started by stripping a website and rebuilding it and moved from there.”

Having already developed three websites for clients, Gordon said that he finds it difficult to land jobs consistently.

“Marketing is the hardest part for me. It’s hard to get clients, but I can really design websites well. I have designed a website for a work and travel company and it allows students to create an account and have dialogue with the company. I also created a mobile app for a loan company,” he said.

On his own website, syncrocy.com, Gordon is pushing his database-management design with the hope that small businesses will see his vision and buy into it.

“A lot of business don’t have a database-management system and their stocks are all scattered. With this database-management system, they can put in everything from the inventory into the database. It calculates the profit, it sends an email every time the cashier makes a transaction, you can tell which cashier is operating where, and it generates a sales report whenever you want it,” he disclosed.

He said that if this gets off the ground, he will be able to live a better life.

“I am willing to give businesses a one-month free trial. I really want to see this work. I want to elevate myself. That is why I am doing all of this. My circumstances bother me every day and that’s why I am working so hard to do something with myself. I would really love a new computer as well, so I can do more,” Gordon said.

He added: “You can’t give up because when you give up is when all hope is lost.”