Jamaicans in US have beef with oxtail hike 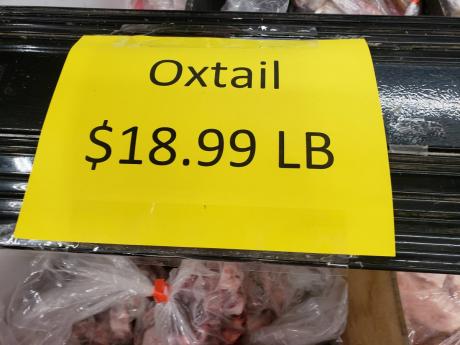 Contributed
A sign in a Caribbean store on Main Street in East Orange, New Jersey, advertising oxtail for US$18.99 (more than J$2,800 per pound).

For thousands of Jamaican families overseas, oxtail is a treasured Sunday dinner dish that connects members of the diaspora to happy memories of their homeland.

Cow foot could be had for around US$2.99 per pound on Monday.

“I was shocked when I saw the price tag for oxtail at the store on Main Street in East Orange,” Jenny Flowers, a shopper, told The Gleaner. “I assumed that the bags of oxtail were US$18.99 each, but when I examined it closer, I saw it was $18.99 per pound,” the astonished housewife added.

Peggy Brown, a Jamaican who migrated to New York in the late 1960s, told The Gleaner that when she moved there, oxtail was virtually a giveaway item.

“Back then in the Bronx, if you were a regular shopper, meat shops would throw you some free oxtail, if you had use for them. At that time there was nothing sexy about oxtail bones, as they had very little meat. Except for a few diehard Jamaicans, housewives turned up their noses at oxtail meat and they went after chicken, beef and mutton.”

So how did oxtail upgrade itself from the meat of malice to become a seductive, succulent stew on fine-dining menus and in family Dutch pots?

A Jamaican restaurateur in The Oranges, New Jersey, lamented the escalating prices but blamed it, in part, on international trade practices.

“Years ago when I started my restaurant, a 15lb case of oxtail was US$15. Back then, we got a lot of oxtail from Canada. The importation of oxtail from across the border has been curtailed due to trade issues, although other meat products like cow foot, cow skin, and steaks from Canada are allowed easy passage into the United States,” the restaurant owner revealed.

In Canada, prices appear to be stable at about $8 per pound.

Price pushbacks have even spawned a movement, with caps and T-shirts, billed ‘Make Oxtail Cheap Again’.

Mike Duncan, community activist and restaurant owner and supplier in Queens, New York, believes that oxtail prices are being driven up primarily by an insane demand from Jamaicans. And he has a solution.

“If all the Jamaican restaurants come together and decide to suspend the sale of oxtail for two weeks, the prices would go right back to where they belong,” he said.

A meal of the oxtail stew, with rice and peas, costs between US$18 and US$25 at Caribbean takeout restaurants, compared to US$8 to US$10 for chicken.