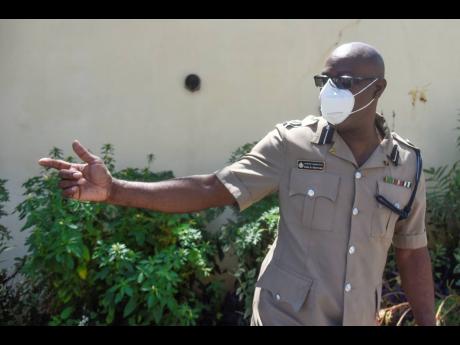 Nicholas Nunes/Photographer
Gary Griffiths, assistant commissioner of police for Area 5, is urging the authorities to remove mentally ill persons from the streets 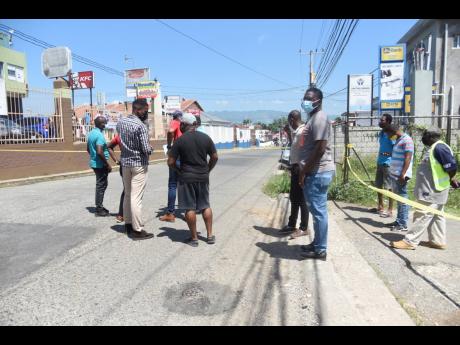 Nicholas Nunes/Photographer
The scene were Detective Constable Paul Gordon was reportedly attacked and killed by a mentally ill man along King Street in the vicinity of the Linstead Market about 6:25 a.m. on Friday. The police officer had gone with a colleague to use an ATM, when 25-year-old Alwayne Shakespeare attacked him with a stone.
1
2

A District Constable was executed at his central Kingston home by armed thugs on Friday night, the police have confirmed.

According to reports, Armstrong, who was assigned to the JCF’s Band Division, was standing at his gate in Allman Town when he was attacked by gunmen and shot several times.

Gordon, who was attached to the St Catherine Scenes of Crime Unit, was reportedly fatally attacked with a stone by a man of unsound mind along King Street in the vicinity of the Linstead Market about 6:25 a.m.

According to reports, the police officer had gone with a colleague to use an ATM, when 25-year-old Alwayne Shakespeare attacked him with a stone.

Gordon reportedly collapsed and was rushed to hospital, where he was pronounced dead.

While seeking to accost Shakespeare in the market, he reportedly confronted police officers with a machete and was shot and later died.

When The Sunday Gleaner visited the scene, a number of the policeman’s colleagues were in shock over the deadly assault.

“This is a day of mourning for us as the constable was attacked viciously with the stone that killed him. The [injury] was so severe that he was dead even before leaving the scene,” said Assistant Commissioner of Police for Area Five, Gary Griffiths.

“There needs to be an urgent programme to monitor and remove these mentally ill persons from the streets,” Griffiths added.

Gordon’s colleagues and members of the Linstead community remember him as an affable cop, whether he was on or off duty.

“It is a stressful period as the murder of Corporal Delwyn Jackson is still upon us. His family is still being counselled, now this,” Detective Sergeant Robert Robinson, a forensic crime scene investigator, said.

Griffiths’ call was supported by other onlookers gathered at the scene, who claimed that the suspect had previously attacked several persons within the Linstead community.

“Is two days ago that him knock down a woman who was seven months pregnant,” said Linstead resident Livingston Edwards. “Him always a lick people and I am blaming the relevant authorities for his actions. Facilities must be built to house these people as it is the policeman now, but other attacks will happen. The sick need care.”

“I worked at the Kingston Public Hospital for 20 years. I retired and things still remain the same – little or no help for mentally challenged persons,” Aird said.

The Chaplaincy Unit of the JCF has been called upon to counsel the officers’ grieving colleagues and relatives.

The Independent Commission of Investigations (INDECOM) and the Major Investigation Division of the JCF have processed both Linstead incident scenes.

It said that its probe will include gathering of forensic evidence for testing, interviews of law enforcement officers, witness canvassing and statement collections.

It is also asking members of the public to share any information that will be useful to this investigation.

Checks have revealed that more than 100,000 Jamaicans are being treated for mental illnesses in the public health system.

The Mental Health Act of 2007 gives health personnel the authority to remove and treat patients for the safety of the public.

There is an overwhelming request to have a special group to manage the mentally ill throughout the island.