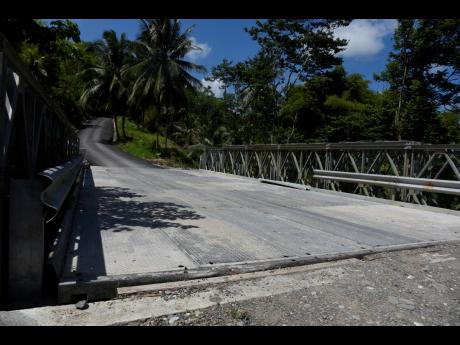 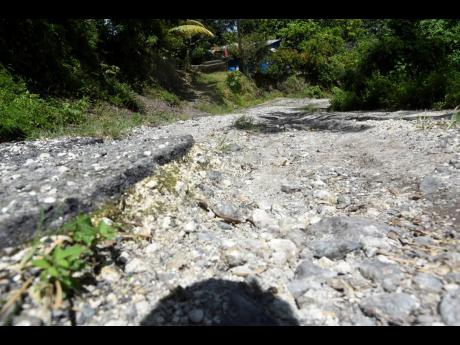 Nicholas Nunes/Photographer
A section of the raodway in Coopers Hill, Portland. 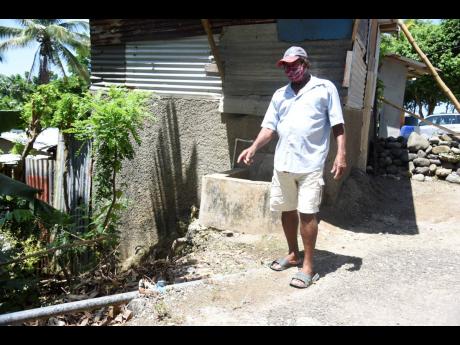 Nicholas Nunes/Photographer
Charles Norris shows the pipeline that runs into Coopers Hill, Portland, that has been dry for over a year.
1
2
3

DEPLORABLE ROAD conditions, compounded by a lack of piped water, are among the plight faced by residents living in the farming community of Coopers Hill in West Portland who are now appealing for help.

Businessman Christopher Norris, who operates a grocery shop at the square in Coopers Hill and who journeys to Port Antonio to buy supplies at least three times per week to satisfy the needs and demands of residents lamented the worsening road conditions.

He noted that a new bridge had been erected recently to replace the old one, which fell into a state of disrepair and was ordered closed more than three years ago. He pointed out that a section of the roadway leading from the new bridge into Coopers Hill had also been rehabilitated and retrofitted with drains.

“This was well-needed, and we really thank our member of parliament (MP) for the assistance. However, other section of the roadway is still in need of repairs,” said Norris.

“The challenge we have right yah so now is the road and water system. Sometime you go out and you have to pay lots of money to return. Dem really fix round a one part a di road, but dem need fi fix up yah so too. If a mi alone a travel from Port Antonio to Coopers Hill, it can cost $3,000. To leave from Coopers Hill to Port Antonio in a taxi it cost $500. So it is really because of the bad roads that the taxi men are charging so much,” added Norris.

Daryl Vaz is the member of Parliament for West Portland and is also the minister with responsibility for energy, technology, and science.

Other residents, including Horace Kenlock (a farmer), Christine Hemmings (a store clerk), David Brown (computer technician), and Carlene Brown ( a returning resident) all shared similar sentiments and added that there is a need to improve the water situation and to effect repairs to the roadway, which is creating a burden on their pockets, especially when travelling by taxi.

The distance from Port Antonio to Coopers Hill is approximately eight miles, but according to Norris, the cost to travel from the resort town to Fellowship is $150. He argued that it is only when one has to travel into Coopers Hill, where the roadway is atrocious, that the fare hike comes into play, which is crippling ordinary residents and business operators.

Norris noted that there is a chronic water shortage in the area and that residents have to depend on rainfall to get water to carry out their domestic chores and other functions. He noted also that the absence of piped water is prolonged, dating back to more than three years.

But councillor for the area Stephen Williams is refuting aspects of the comments and statements made by the businessman and others, arguing that while there might not be any piped water available to residents, MP Vaz has put in place a system for the frequent trucking of water to Coopers Hill, Dumphreys, and other adjoining communities in West Portland.

According to Williams, who sought to dispel comments made by the residents, he has never seen a more comprehensive water trucking system in West Portland anywhere else and that a concerted effort is made to ensure that every household benefits from potable drinking water.

“There is a need for rehabilitation and extension of the water line so that persons can be connected,” said Williams.

“There is a challenge with regards to electricity. We need extension there as well. We are aware of it, and we are working towards addressing those needs. But with regards to say that persons have not received water for three years, maybe not in the pipe, yes I would agree with them, but in terms of trucking and ensuring that they have water on a consistent basis, we do. We have even given persons in that area black tank.

“They have not received piped water for… and there is a need to address that situation. Trucking of water is done regularly. The road situation I would say is 60 to 70 per cent complete. As you can see, the section that is incomplete is the worse of the two. The PMC (Portland Municipal Corporation) spent approximately $10 million to rehabilitate a section of that roadway, probably about two kilometres. The provision and installation of the new bridge was done through MP Vaz and the National Works Agency, thus paving the way for the roadway to undergo major rehabilitation,” he noted.