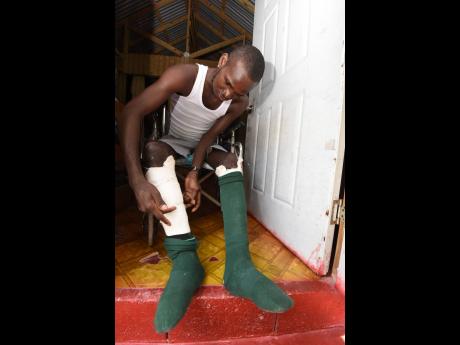 Five months after Cavean Bland sustained lifelong injuries in a double motorcycle collision along the Hampton Court main road on May 23, which resulted in a fatality, he is crying out for help.

Bland needs approximately J$600,000 to cover surgery costs that are geared towards repairing his mouth, right eye, the right side of his face, and his broken legs.

The 26-year-old mechanic told The Gleaner that he was returning home after taking a woman to Springfield when he was involved in the crash.

Bland spent about a week and a half in hospital recuperating. He has lost the capacity to smell because of his broken nose and he can barely open his mouth.

He regrets not wearing a helmet before the collision – a decision he made because he did not plan on going far from his home.

His mother, Neckeshia Fearon, who journeyed for more than two hours from their home in Cheswick, St Thomas to The Gleaner Company last week seeking help, better explained what took place in the crash and his recovery process.

Already, the family has received a cheque for $50,000 from St Thomas Eastern Member of Parliament Michelle Charles.

According to statistics from the National Road Safety Council, up to last Sunday, bike deaths accounted for 127 of the 360 crash fatalities recorded this year.

But the toll has an outsize effect on families when breadwinners are badly injured or killed, especially when they die young.

Fearon said that since the moment she was informed of the crash, she had hopes that her son would have emerged from the collision unscathed.

“Normally, when he fell off his bike, an me call him, mi normally get him. So when mi call him on the 23rd of May and mi nah get him, mi realise seh di accident serious,” she told The Gleaner.

Bland was rushed to the Princess Margaret Hospital and later transferred to Kingston Public Hospital and was admitted to the Intensive Care Unit.

Fearon never saw her son for some time and she worried throughout it all. It was a case of deja vu, as his father had also suffered injury in a crash.

Now, she is happy that her son is back inside her house that was provided by donors through Food For The Poor Jamaica two years ago.

Bland’s mother said it’s been tough taking care of the bike taxi operator, with a fundraiser going bust after two-thirds of the 150 tickets went unsold.

“Nuff time, mi affi walk and beg, even though mi nuh want fi do it, but mi affi mek him get something fi eat ... ,” she said.

“From the 23rd of May when him meet inna di accident and him come out Father’s Day, from Father’s Day until today, every time mi a go a town (Kingston), a $10,000. Mi haffi borrow and beg fi carry him.”

Fearon said this is not her first major struggle in life. In 2013, their house was burnt to the ground and she had to start over.

A charity organisation intervened and constructed a new house for her.

Through it all, Bland says he is happy to have survived.

He had a word of warning for other motorcycle drivers.

“Remember to wear your helmets. It’s very important. Yu no want yu face mash up like mine,” he said.

The family has appealed for fundraising assistance to finance the surgeries.